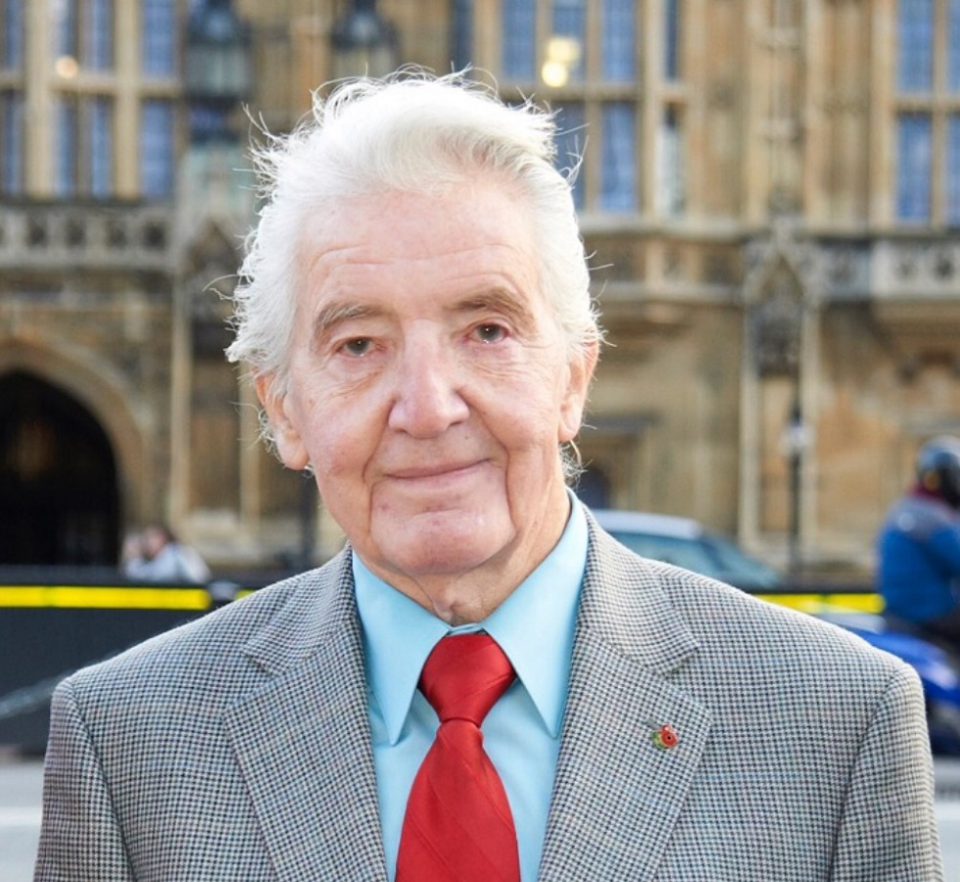 Fiery and forthright, with a prodigious recall, Skinner is one of the best-known politicians in Britain. He entered the House of Commons back in 1970 and has watched Prime Ministers come and go – Heath, Wilson, Callaghan, Thatcher, Major, Blair, Brown – and yet remains uncorrupted by patronage and compromise. He’s so popular that a public backlash forced the current PM to apologize in Parliament for calling Skinner a dinosaur who should be in a museum. Scroll down to the bottom to check out how his song went viral.

Who is Dennis Skinner?

Dennis Skinner is a British Labour politician who has been Member of Parliament (MP) for Bolsover from 1970 to 2019. He was Chairman of the Labour Party from 1988–1989 and served as a member of its National Executive Committee.

Dennis Skinner’s Politics Were Influenced By His Early Life:

Born in Clay Cross, Derbyshire, Skinner is the third of nine children.

Dennis Skinner was born at a time where the Bolsover area was dominated by coal mining. He was born to a coal miner Edward Skinner who was sacked after the 1926 General Strike.

Skinner, despite the wishes of his mother, and despite a Grammar School education, followed his father down the pit. Skinner was a miner for over twenty years and became a NUM leader and Clay Cross Labour Party councillor.

A young Skinner attended Tupton Hall Grammar School after passing the Eleven-plus a year early. He later attended Ruskin College in Oxford in 1967 after doing a preparatory course run by the NUM at the University of Sheffield.

He worked in the mines from 1949 to 1970, at Parkhouse Colliery in Clay Cross until it closed in 1962. Then he went to work at Glapwell Colliery near Chesterfield.

Although he joined in 1956, he would go on to become the chairman of the Labour Party between 1988 and 1989, and has sat on the National Executive Committee in most years since 1978.

He was a councillor on Derbyshire County Council from 1964-70, and a Clay Cross councillor from 1960-70. He became the leader of the Derbyshire area of the National Union of Mineworkers between 1966 and 1970.

A former chairman of Labour, current member of the party’s ruling National Executive Committee, Skinner’s Parliamentary heckles, and interventions have made him famous. He was told to leave so often from the Commons that suspension became an occupational hazard.

But he was first elected MP for the safe Labour seat of Bolsover at the 1970 general election. He was a significant advocate of the National Union of Mineworkers and its leader Arthur Scargill in the 1984-85 miners’ strike.

He is popular for his left-wing views and acerbic wit and for never missing a Commons session. He is also a member of the Socialist Campaign Group of Labour MPs.

Conversely, despite his left-wing views, Skinner for a long time had a positive relationship with Prime Minister Tony Blair, a leading figure on the right of the party, stemming from advice that Skinner gave Blair regarding public speaking. As late as February 2018, he described the Blair and Brown ministries as a “golden period” for the NHS. However, Skinner strongly criticised Blair in May 2019, after the former Prime Minister had advised pro-remain Labour supporters who felt that the party’s line on Brexit was too ambiguous to vote for explicitly pro-remain parties in the 2019 European Parliament election; in the Morning Star, Skinner described Blair as a “destructive force” who was “try(ing) to destroy the Labour Party so people keep talking about his reign” and stating that he “went into Iraq and destroyed himself. He helped David Cameron and Theresa May into power. You’re talking about a man who made a mess of it.”

Skinner has voted for equalisation of the age of consent, civil partnerships, adoption rights for same-sex couples and to outlaw discrimination on the grounds of sexual orientation, and has a strong pro-choice stance on abortion. On 20 January 1989, he talked out a move to reduce the number of weeks at which termination of a pregnancy can be legally performed in Britain by moving a writ for the Richmond by-election. On 7 June 1985, he prevented debate on a bill by Enoch Powell which would have banned stem cell research by filibustering when moving a writ for a by-election in Brecon and Radnor.

In 2000, Skinner denounced former ally Ken Livingstone, at the time a Labour MP. Livingstone had failed to win the party’s nomination to be a candidate for Mayor of London, and had then decided to run as an independent candidate instead, urging his supporters to help Green Party candidates get elected. Skinner said that Livingstone had betrayed Labour party activists in his Brent East constituency, whom he described as having fought for him “like tigers” when his majority had been small: “He tells them he’s going to be the Labour candidate, then he lies to them. To me that’s as low as you can get”. He contrasted Livingstone with the official Labour candidate, Frank Dobson, saying that Dobson was “a bloke and a half… not a prima donna … not someone with an ego as big as a house”. Skinner said Livingstone would “hit the headlines, but you’ll never be able to trust him because he’s broken his pledge and his loyalty to his party… The personality cult of the ego does not work down a coal mine and it does not work in the Labour Party”.

Skinner supported David Miliband in the 2010 Labour leadership election, which was won by David’s brother, Ed Miliband. In March 2011, he was one of 15 MPs who voted against British participation in NATO’s Libya intervention.

He stated in 2014 that he has never sent an email, and does not have a Twitter account.

Skinner was one amongst36 Labour MPs to nominate Jeremy Corbyn as a candidate in the Labour leadership election of 2015. He later supported Corbyn, alongside the majority of Labour MPs, in voting against the extension of RAF airstrikes against Islamic State of Iraq and the Levant in Syria on 2 December 2015.

Suspensions From the House of Commons Numerous Times For “Unparliamentary Language”:

The popularity of Skinner largely comes from being suspended from Parliament on at least ten occasions, usually for “unparliamentary language” when attacking opponents. Notable infractions have included:

In the 2004–05 sitting of the House he claimed the least expenses for an MP who served the full year.

He was never a member of an All-Party Parliamentary Group; does not eat alongside parliamentary colleagues in the Commons dining room; nor partake in trips or holidays paid for by others; nor buys a round in the Commons Bar; and only stays in the House of Commons during the Queen’s Speech at the State Opening of Parliament, as he advocates outright abolition of the House of Lords.

He usually sits on the first seat of the front bench below the gangway in the Commons (known as the “Awkward Squad Bench” because it is where rebel Labour Party MPs have traditionally sat) in a tweed jacket (whilst most other MPs wear suits) and signature red tie. He gained the nickname “the Beast of Bolsover” for falling foul of the procedures of Parliament.

Nature of the Beast documentary:

In 2014 production began on a documentary about Skinner. Principal photography was completed in the summer of 2016 and the feature length film by Shut Out The Light is awaiting completion funding. The documentary traces Skinner’s rise to a political icon and covers his working-class upbringing, his family influences and his hobbies away from “The Palace of Varieties”. Filming locations included the House of Commons, Hyde Park, Clay Cross, Durham Miners’ Gala and at several events where Skinner was speaking, including Rhyl, Ashton-under-Lyne and Gainsborough. His four surviving brothers and several Bolsover constituents make up the remaining interviewees of the documentary.

He Was In A Viral song:

Filmmaker Daniel Draper, who made the Nature of the Beast documentary about the life and times of the ex-MP, produced the track’s video. “It’s a catchy little ditty,” he said. And, the song topped the Amazon download charts ahead of Lady Gaga, Kylie Minogue and Bruce Springsteen.

The song is a mix of Mr Skinner’s speeches and quips, and lyrics referring to his parents and upbringing in Derbyshire, before his arrival at parliament 50 years ago. Mr Skinner is known for his support for the miners throughout the 1984-85 strike and fighting for their pension rights.

When the so-called Beast of Bolsover, lost the seat he had held since 1970, in December, musician Robb Johnson wanted to pay a tribute to the acerbic politician, who grew up in Derbyshire.

“We thought it would be lovely to get Dennis Skinner into the charts,” Mr Johnson said who had always “admired” the ex-MP and trade unionist.

The track Tony Skinner’s Lad, remained at number one in the Amazon best sellers, ahead of Magic by Kylie Minogue and Ghosts by Bruce Springsteen.

It also reached number 37 on Apple’s iTunes chart and 19 in the Official Singles Download Chart.

However, the fact that download sales account for only about 4.8% of the overall music market might explain why the song did not feature at all in the Official Singles Chart Top 100.

How Dennis Skinner Lost His Bolsover Seat In 2019:

Following the retirement of Peter Tapsell in 2015, Skinner was one of the four longest-serving MPs, but did not become Father of the House, as two other MPs, who were also first elected in 1970, had been sworn in earlier on the same day and consecutively both held that position: Gerald Kaufman (2010-2017) and Kenneth Clarke (2017-2019). Skinner, the oldest sitting MP since 2017, stated that in any case he would not accept the honorific title. In 2019, with Clarke’s impending retirement, the issue of Skinner becoming Father of the House resurfaced but was rendered moot, when Skinner lost his seat in the 2019 election.

Who Is John Crace From The Guardian? Quick Bio Here

The History of the Famous Rolex Watches

Of Lost Time Publishes Historical Letters in Behind Bars Collection