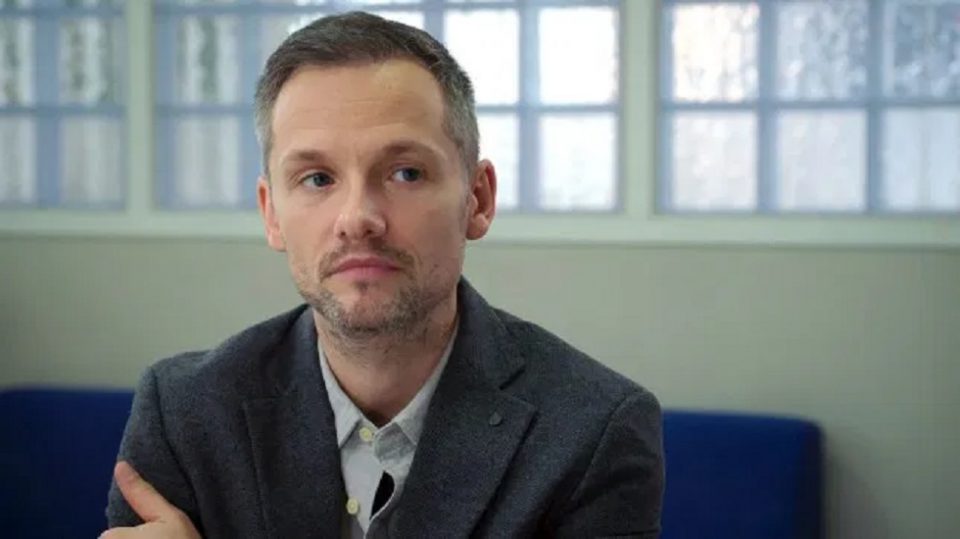 Jack Ryder is the British actor best known for portraying Jamie Mitchell in the BBC One soap opera: EastEnders from 1998 to 2002. Since then he has established himself as a film and theatre director and of course, he continues to act, even playing an evil dead character in Holby City where he plays a psycho. This seems like a dream come true because he once said: “I probably want to pile on the pounds and play a psycho, or something.” Jack Ryder’s first TV part was on EastEnders (1985) and he got the role when he was spotted at a theatre workshop. After becoming a teenage heart-throb, this is his story.

Where is Jack Ryder now?

Ryder now lives in London and France. He is a supporter of Newcastle United F.C.

Is Jack Ryder in Holby City?

Yes, Jack Ryder is no stranger to the world of British soaps having previously appeared on EastEnders as Jamie Mitchell from 1998 – 2002, now he is back on your tvs or laptops in Holby City.

Speaking back in November Jack said: ‘I am delighted to be joining Holby City and look forward to working with such a talented group of people. ‘I can’t wait to give a voice to this exciting new character and serve a show that people love.’

The former Walford fan favourite has joined the BBC One show (another fan favorite BBC show is Top Gear) as consultant surgeon Evan, the boyfriend of Chloe Godard (another new character to the show played by Amy Lennox) – who is a doctor at a neighbouring hospital. Actor Jack Ryder joined the soap in March as a surgeon successfully playing Chloe Godard’s controlling ex.

Holby City killed off Evan Crowhurst (Jack Ryder) in dramatic scenes at the beginning of the month. Evan was left fighting for his life when his rape victim Chloe Godard (Amy Lennox) stabbed him in self-defence after he raped her. The sinister character had been stalking Chloe for six months but the storyline came to an end when he turned up at the cottage she was staying at on her own. As Evan woke in intensive care, he teased Cameron Dunn (Nic Jackman) that he was capable of spinning the situation to his advantage.

What age is Jack Ryder?

Has Jack Ryder got a girlfriend?

Jack Ryder is not currently dating but his ex Kym Marsh is. Kym Marsh’s boyfriend, Scott, is 33-years-old and a major in the Parachute Regiment.

Kym revealed to Fabulous magazine that she is in love with Scott, who she has now been dating for over a year: ‘He has a smile that has the ability to light up any room. He’s got a lovely aura about him. People want to be around him,’ she said, ‘And I love that he’s not got any idea how fit he is.’

Born in Glasgow, the military man first met Kym in 2018 and the duo started dating in July last year, following her split from Matt Baker. Kym and Scott were introduced by the star’s celebrity pal Antony Cotton and got to know each other via FaceTime and texting before they agreed to meet for their first date.

It was announced on 20 March 2008 that Kym and Jack had decided to separate and then subsequently divorced.

How did Jack Ryder die in EastEnders?

It’s been 17 years since Jack Ryder broke hearts when he stopped playing Jamie Mitchell in EastEnders after a four year stint on the BBC soap. Jack made his first appearance on the soap as Jamie in November 1998 with blonde curtains that could have made David Beckham jealous back in the day. Jamie’s final appearance on the soap came on 25th December 2002 when the character fell victim to a classic, dramatic Christmas Day story-line on the soap.

Jack Ryder joined EastEnders in 1998 playing the role of Jamie Mitchell, Billy Mitchell’s nephew, who became Phil’s surrogate son after it became apparent that Billy was abusing him – although the pair’s relationship changed after Jamie stood up to his uncle.

Jamie was best remembered for his romance with Sonia Jackson (Natalie Cassidy) although was caught up in the storyline when Sonia gave birth to baby Chloe without even realising she was pregnant – with Martin Fowler, whom she had been seeing before Jamie, turning out to be the father. Their relationship survived Chloe – later renamed Rebecca – being adopted – as well as Jamie cheating on Sonia with Zoe Slater, and being blamed by Phil for letting Lisa escape to Portugal with his daughter Louise. Ultimately Jamie and Sonia were reconciled and got engaged, but things came to a tragic end when Jamie was accidentally run over by Martin Fowler – and later died in hospital on Christmas Day 2002.

What was Jack Ryder in?

Voice Over Credits: The Archers, The Last Story (Nintendo Wii).

Jack is a theatre & film director. The actor directed Tim Firth’s The Band, which became the fastest selling tour of all time before transferring to Theatre Royal Haymarket and a run in Germany. His first play, The History Boys, opens February 2020 at Wolverhampton Grand.

On 28th May, Jack publishes Jack’s Secret Summer with Hachette Children’s Group. Jack’s Secret Summer is Ryder’s first book, as well as his début children’s novel. Taking readers on a spellbinding journey reminiscent of Enid Blyton’s The Famous Five, Ryder tells a heartfelt adventure tale of a secret summer gang. Featuring an old abandoned house at the top of a hill, a strange girl who lives there and a world of magical secrets, Jack’s Secret Summer is available for pre-order now, with a follow-up novel due in May 2021.

What has Jack Ryder been in since EastEnders?

On leaving EastEnders in 2002, Ryder, then aged 21, performed as Justin Timberlake on Celebrity Stars in Their Eyes (which he won), appeared in the pantomime Sleeping Beauty at the Marlowe Theatre in Canterbury and was cast in a recurring role on Five’s Family Affairs which he pulled out of when he learned that the series was soon to be axed. In 2004, he played a role in the ITV crime drama MIT: Murder Investigation Team and appeared in a play broadcast on BBC Radio 4. BBC Radio has been prevalent since the 1920s.

In 2006, Ryder starred in the British film “Popcorn”. The movie was released in the spring of 2007. Ryder was due to become a regular character in the then-new ITV1 daytime series The Royal Today, a contemporary spin-off of The Royal, but he subsequently withdrew from playing the role.

In 2007, aged 26, Ryder appeared in the play The Safari Party by Tim Firth and in Kenneth Branagh’s production of The Play What I Wrote which toured the UK extensively. In Spring 2008 he was in Christopher Luscombe’s production of Alan Bennett’s play Single Spies playing opposite Nigel Havers. Then Ryder played Romeo in Michael Bogdanov’s production of Romeo and Juliet with Sara Lloyd-Gregory as Juliet.

In October 2008, Ryder joined The Archers as Ryan. Since 2009, he has played the photographer Laurence in the West End production of Calendar Girls at the Noël Coward Theatre, where he was also the assistant director. He currently continues as associate director of Calendar Girls, responsible for all theatre productions world-wide.

In December 2010 Ryder wrote and directed his first short film, an adaptation of Mary Grace Dembeck’s short story Act of Memory starring Claire Skinner, Owen Teale and Anna Massey which was shot on location in London and went on to be screened at the Cannes film festival in 2011. In 2012, he provided the English voiceover for Zael, the main protagonist in the video game The Last Story.

2013 saw Ryder become Associate Director of the stage play The Full Monty by Simon Beaufoy, which opened at the Lyceum Theatre Sheffield. In 2014 he directed his second short film DOG and in July 2015 directed his first red button episode of Casualty for the BBC.

Ryder continues his relationship with The Full Monty as the director of the new touring production starring Gary Lucy which tours the UK through the autumn of 2015 through into 2017. Ryder returned to acting and played a new character Gareth in Kay Mellors’ BBC drama In the Club which aired in May 2016.

In 2017, he was the assistant director to Tim Firth on his and Gary Barlow’s new musical “The Girls” opening at the Phoenix Theatre in London’s West End on 21 February.

As a result of his work on “The Girls” and his success on “The Full Monty” Gary Barlow and Take That asked Ryder to become the co director with Kim Gavin on their new musical “The Band” which will open in September 2017.

In November 2018 it was announced that Ryder will join the cast of Holby City as a new Consultant General Surgeon debuting in 2019. Jack Ryder sent his fans into a tailspin, after unveiling his suave greyed look on Holby City. Used to his famous blonde curtains, fans were shocked to see him in favour of a more greyed look, Jack can be seen in a preview ahead of his debut on the drama next week, 16 years after his character Jamie Mitchell’s death.

Where are Holby and Casualty filmed?

Holby City is a British medical drama television series that airs weekly on BBC One. The tv show was created by Tony McHale and Mal Young as a spin-off from the established BBC medical drama Casualty, and premiered on 12 January 1999. Both shows are set in the same hospital as Casualty in the fictional city of Holby, and featured occasional crossovers of characters and plots with both Casualty (which featured dedicated episodes broadcast as Casualty@Holby City) and the show’s 2007 police procedural spin-off HolbyBlue.

Holby City and Casualty are both set in Holby City Hospital, in the fictional county of Wyvern, in the southwest of England near the Welsh border. The city exterior is represented by Bristol, though Holby City is filmed at BBC Elstree Centre in Borehamwood, Hertfordshire.