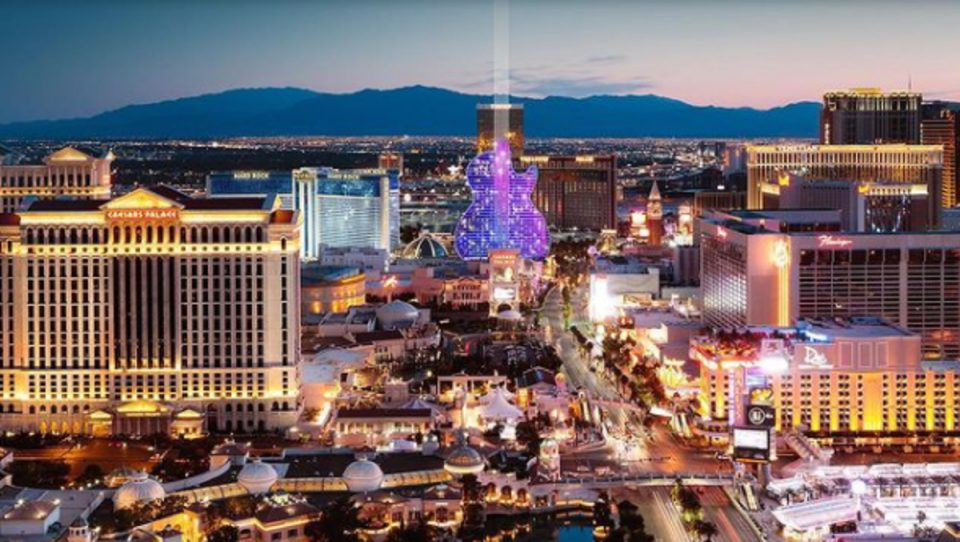 The famous skyline of the Las Vegas Strip is about to change again, with a new Hard Rock hotel being built in the grounds of the Mirage Hotel and Casino.

It is reported that the new resort will feature a gigantic guitar lit up in splendid LED lighting that shoots up 450 feet into the air, much like the company’s iconic guitar at its Florida resort. If you love to travel, perhaps you will add this new resort to your bucket list?

The Las Vegas Strip, which, as you probably already know, is located in Clark County, Nevada, is renowned for its concentration of casinos and hotels and is a favourite destination for gamblers and sightseers. The Strip is south of the city limits of Las Vegas, but it is still referred to as “Las Vegas”.

Many of the world’s largest casino, hotel, and resort properties are located on the Strip, known for synchronic architecture, lights, and diverse attractions.

The Strip’s vast array of hotels, casinos and restaurants, not to mention the residential properties, has made it one of the biggest, most popular and iconic tourist destinations. It is the major influential force behind the Las Vegas economy.

In recent news reports, however, it appears that things are about to change, and it looks as though the Las Vegas Strip is about to get another rockin’ revamp. Hard Rock International, which owns, amongst other things, the infamous Hard Rock Cafe’s around the world, acquired The Mirage, which MGM previously owned, in a massive $1 billion deal.

It is reported that Hard Rock International intends to turn the iconic casino into a guitar-shaped hotel, much like the one that they have already built in Florida, which some have dubbed as an architectural marvel.

Hard Rock International owns the world’s largest and most valuable collection of authentic music memorabilia at more than 86,000 pieces, which are displayed at its locations around the globe and had no prior involvement with the Hard Rock Hotel & Casino in Las Vegas before 2020.

In May 2020, however, Hard Rock International purchased the licencing and naming rights to Hard Rock Hotel & Casino Las Vegas. The company plans to bring the iconic brand to the Vegas Strip when the right opportunity presented itself, which we guess it now has.

After the past couple of years with the worldwide pandemic, with numerous lockdowns that were (understandably) forced upon the majority of the world, the hospitality industry and the gambling industry, in particular, are finally showing indications that they are rebounding.

After the colossal losses made during the pandemic, Las Vegas is, once again, the gregarious and vibrant centre of entertainment that it once was, with signs of a recovery are already showing.

Las Vegas visitor numbers are back to pre-pandemic levels. You’ll enjoy the awesome entertainment, restaurants, and casinos if you plan a trip. Be sure to read up on games you might like, including the main Texas Hold ’em rules, which is the popular poker game played in card rooms all along The Strip.

According to the hotel group, the Mirage first launched in 1989 and was purchased by MGM Resorts in 2000. However, the property, known for its out-of-the-ordinary experiences, such as dolphin yoga, was hard hit by the pandemic and had to cut back on operations, even resorting to closing for a few days each week.

This isn’t the first time a legendary Vegas Strip property has recently been sold. The Las Vegas Sands Corporation agreed to the sale of its flagship hotel, The Venetian, in March.

Hard Rock International is setting its sights on further expansion, with plans to open a new hotel in New York, which may include a casino and the exclusive 400-guest Music Row venue.

Whether the Las Vegas Strip needs another hotel complex is still to be determined, but one thing is sure, it will most certainly attract more visitors to The Strip, which will ultimately help with the recovery of the hospitality and gambling industries. It’s all good news for the existing hotels and casinos and for the seasoned gambler.

So, with the prospect of a guitar-shaped hotel set to distort the Las Vegas skyline, complete with its deluxe pools, cabanas, spas and salons, surely the residents and frequent visitors to the area should be nothing but excited.

Interest Rates – What Is It and Why Is It So Important?

Dating a Single Mom: Best Tips That Will Make It Work