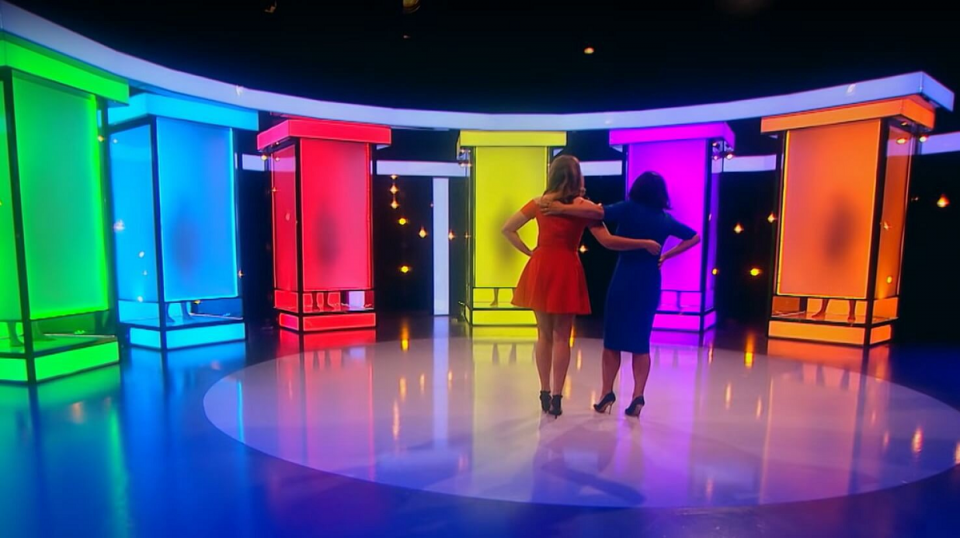 Naked Attraction is arguably the most talked about reality show in the UK: while contestants are judged primarily on their appearance, the show eliminates the traditional inclusion of “clothing”, hence the name “Naked Attraction”. It is a show which has become very (in)famous because of its “naked” pretext. Let’s find out more about it.

Naked Attraction: All You Need To Know

What is the idea behind Naked Attraction?

Six colored confined spaces bring together naked singles whose bodies are revealed gradually, starting from the feet. In front of them, is their potential love which remains clothed until the end. If the dressed competitor likes what they see, they can zoom in on a part of the body.

At the end of each round, the dressed competitor chooses someone to eliminate. An original and funny English date show, since the participants first get to know each other naked, before spending an evening together, dressed this time (of which we will only see a brief summary, the show focusing primarily on partner selection).

The show boasts of having reversed the order of a conventional “date”: we start the evening naked to finish it fully dressed.

Well the concept is still strange, even shocking for the most prudent viewers, and the realization could have largely been done without recurring close-ups on the genitals of the participants. Conversations on the set, very raw and very targeted, can also be puzzling, but at the same time the tone is in line with the theme of the show, and we can not accuse Channel 4 of showing hypocrisy.

Who is the host of Naked Attraction?

The host, Anna Richardson, returns to the meaning of the show which promises, according to her, to be ” a more instinctive way to find love “. The sexy series of 9Now offers participants to reveal themselves to find their ideal partner in the strangest social experience lived on television.

What happens on an episode of Naked Attraction?

Throughout the episode, Richardson presents trivial facts about anatomy using animated videos, such as why men’s noses are typically bigger than women’s. (a wider nose is needed to inhale more oxygen in order to build muscle mass.

When there is nothing left to physically reveal, naked contestants are invited to speak. This gives the breeder another characteristic to consider attractive or not.

They may also perform other random tests, such as smelling naked candidates’ breath. When there are only two potential candidates left, then the person vying to find love must also strip down and choose between the two remaining contestants.

The interest of the show only goes through the range of participants in the series – gay, straight, trans, polyamorous, etc. – which creates a captivating program that transcends borders.

The mechanics of this game prove to be effective, with each time a guy / a girl chooses his future partner among 6 completely naked people, whom he/she discovers gradually (first from the feet to the waist, then until ‘on the neck, and finally in full).

Once there are only two applicants left, the “hero” of the show is made to undress in turn, so that everyone ends up naked in “Naked attraction”.

On such a basis, the dating game show broadcast on Channel 4 could easily turn into something excruciatingly gruesome and uncomfortable.

Is Naked Attraction fun to watch?

In reality, this is not the case, because the tone remains fresh and naughty without taking itself seriously, with a permanent second degree, often initiated by the sympathetic presenter Anna Richardson (not at all in the register of the sexy bimbo, which brings a slightly unusual color in an ultra-codified genre).

Are shows like Naked Attraction normal on British TV?

Above all, we will be less surprised if we know that the British are now used to the lack of modesty on their television screens, since the arrival on the air in recent years of shows as obscene as “Embarrassing bodies” or still “Sex box”.

How have the critics responded to Naked Attraction?

“Stupid”, “ridiculous”, “disgusting”, “embarrassing” … A new show of all-nudes is controversial in England. Its title? Naked Attraction. Singles choose their partner by looking only at their private parts – These are the kind of things that critics have said about Naked Attraction.

Have people complained against Naked Attraction?

Premiered Monday night, Channel 4’s new rendezvous sparked a tidal wave of negative comments. On Twitter, the British did not hesitate to call Naked Attraction a “new lowland” in television. According to The Telegraph, 24 formal complaints were forwarded to the UK’s communications regulator on Tuesday morning. People decried the ubiquity of close-up frontal nudity, in addition to the explicit discussions about participants’ genitals.

The principle of Naked Attraction is simple: six candidates present themselves naked with their faces hidden in front of a single person. The latter then eliminate them in turn after studying their private parts in detail. Whenever she puts a participant on waivers, she has to explain why she is sending the poor man home. The remaining competitor will land a date … dressed, this time.

What did the UK’s leading newspapers say about Naked Attraction?

Not surprisingly, Naked Attraction received devastating reviews from UK newspapers. The Guardian spoke of it as a sign of the apocalypse, while The Mirror reported an overflow of unease. In terms of moments of great embarrassment, we can also cite this reply from the host Anna Richardson, who must explain to the competitor why he has just been eliminated: “She loved your leaping testicles, but today, it is no. “

Are shows like Naked Attraction broadcast outside the UK?

Naked Attraction is far from the only reality show featuring participants in Adam and Eve costumes. Over the past few years, several productions of the genre have hit the airwaves, starting with Naked and Afraid (a kind of Survivor for naturists) and Dating Naked. Seems like whatever critics say about shows like Naked Attraction, a vast majority of the population really wants to see things like it.

Why Should You Play Online Casinos in the UK?