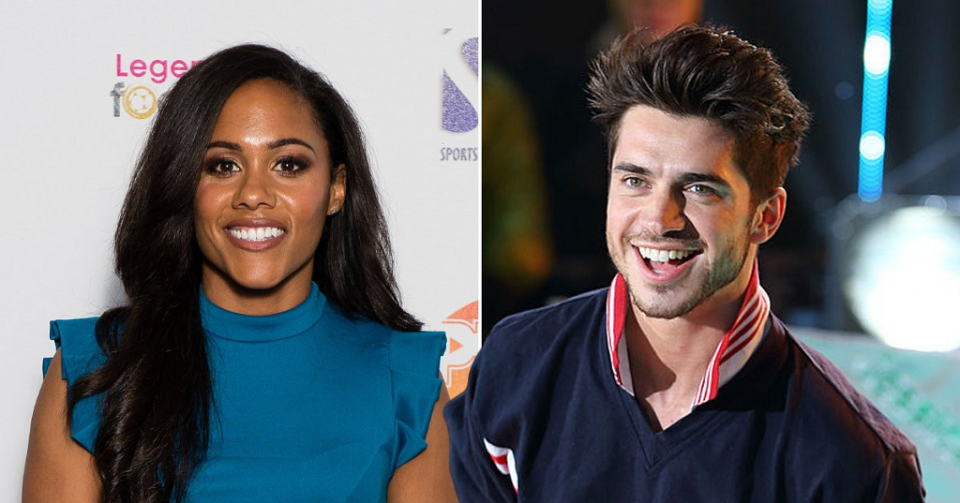 Alex Scott once played football for the England team and proved she can excel behind a microphone becoming the new host of Football Focus. She even danced on Strictly but people seem most interested in wondering: hmm…Alex Scott partner, who is he?

Sam Robertson is Alex Scott’s partner in 2021 and his dating life has been a hot topic in the past. An actor best known for his role in Coronation Street was spotted last year dating Alex Scott.

Alex Scott Partner In 2021: Things Are Getting Serious!

Who is Sam Robertson?

Scottish actor and model Sam is Alex Scott’s partner who was born on October 11, 1985.

Sam plays Adam Barlow in Coronation Street but is more famous for his roles in E4’s Beaver Falls.

The actor is educated in drama and English at Manchester University before dropping out to plunge himself into playing Adam Barlow in 2004. The role paid off, as he would go on to reprise the same role in 2016 and has starred in reality TV.

What has Sam Robertson starred in?

Sam Robertson is most famous for his TV roles playing Adam Barlow but he has also done a stint on reality TV too, appearing in Celebrity Big Brother in 2013.

The actor also starred in The Match as himself, Push, Bedlam and River City.

He hit the big screens as Adam Barlow who is a character with a fair amount of flings  including with Maria Connor on the show – which provoked a fight between him and Aidan in The Rovers.

How long has Sam Robertson been dating Alex Scott?

Away from football and TV cameras, this is what we found out about Alex Scott’s partner.

According to The Sun, it was revealed that on September 7, 2019 that Faye Windass (played by Ellie Leach) had a secret fling with her Corrie (Coronation Street) co-star Sam Robertson during a two-week break from Gareth Gates.

Then in 2020, Alex, who usually keeps tight-lipped about her romantic life, was recently linked to the Corrie actor.

According to The Sun, it was revealed that Alex Scott has been dating the Scotsman after they had a candlelit dinner with drinks on Friday, September 18, 2020.

How long the former football star was reportedly dating Sam Robertson isn’t yet known because it might have started in 2019 in secret or in 2020 as witnessed by online sources (who were seen enjoying a cosy evening together at a restaurant last year).

The pair apparently had a “brilliant time” after being spotted enjoying a “cosy candlelit meal” together in Soho restaurant, Dean Street Townhouse.

After watching Normal People in the summer, Alex said she was ready to find love again, maybe the Scottish Sam who plays Ken Barlow’s grandson Adam, is what she’s been waiting for.

Did you know? The English female footballer initially lived with her former teammate Kelly Smith, after they pooled in to buy a house together in Hertfordshire.

Alex is a former professional football player, who mostly took the role of a right-back for Arsenal and even captained the team.

The female footballer played 140 games for the England national team and represented her homeland of Great Britain at the 2012 London Olympics.

The English footballer even took her to the States where she played for the Boston Breakers.

Alex Scott took home the high honor of an MBE for her services to football in 2017, and retired from playing professional football that same year.

Currently, a football pundit for BBC Sport and Sky Sports, the English female journalist has also presented Children in Need.

She is currently 36 years old as of 2021 as she was born on October 14 1984 in Poplar, East London as Alex Virina Scott to an Irish mother and Jamaican father.

Alex was signed to Arsenal in 1992, when she was just eight years old.

The English footballer appeared on Bear Grylls’ ITV show Mission Survive in 2016, which she won.

Post her football retirement, she co-presented Match of the Day Kickabout and covered the 2018 FIFA World Cup.

The football star later became the first female football pundit at a World Cup for the BBC.

Alex became the new co-host of Sky Sports’ Goals on Sunday alongside Chris Kamara in 2019.

She was a contestant on the 17th series of Strictly Come Dancing, where she came fifth place with Neil Jones.

She was tipped to take over from Sue Barker on A Question of Sport but online trolls have been very nasty towards her because she was also subjected to some horrendous trolling after she co-hosted Children in Need – often with racist abuse.

The star footballer has admitted that trolling has left her scared of living alone. Alex said: “It was like every day, every day when I was coming off I was just getting this wave and this wave. “Then there were death threats and rape threats. I live on my own. “Who can I even speak to about this? I don’t want my mum to worry.”

Alex then confessed a dark secret which was that she turned to drink after the trolling became so bad.

The Olympic footballer soon decided to “use her voice” and “fight for change”. Alex has suffered from depression herself, stating publicly: “Last year I really struggled to cope with the online abuse/trolling I was getting. “I kept quiet from family/friends and tried to hide it with a smile. “Feeling low/lonely, I went to therapy and continue to do so and it’s one of the best things I have ever done.”

Amanda Holden: Interesting Facts About the Britain’s Got Talent Judge