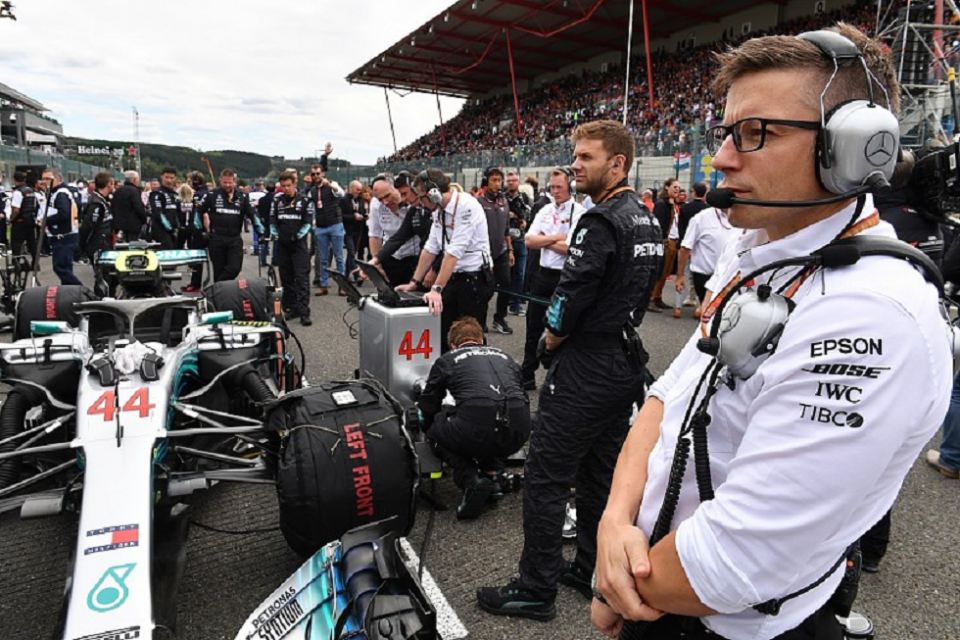 Admittedly, Formula 1 race engineers don’t normally get the spotlight as much as the drivers. However, the racers themselves truly appreciate the hard work that happens behind the scenes. Peter Bonnington shares a close bond with Hamilton and is often heard on team radio talking his driver through race strategy and setting changes on the car. Here are some interesting facts about Lewis Hamilton’s beloved race engineer:

The Race Engineer primarily acts as the link between the team and the driver. They are the single point of contact for the driver whenever he is in the car. In other words, he acts as a second set of eyes and ears for the driver and informs him about the situation on track. What lap times are the others doing? Is there any traffic coming up? Are there hazards on the track?

Race engineers also play a large part in determining car setup, which is crucial to performance over a race weekend.

2. Peter Bonnington Took A Sick Leave At The Worst Time:

It was worth noting that Bonnington missed the Mexican Grands Prix to undergo a personal medical procedure in the U.K. His role was temporarily filled by Marcus Dudley until the US Grand Prix a week later, one race earlier than expected.

Originally, Bonnington had been expected to miss this weekend’s race at Austin as well and then return for the Brazilian Grand Prix in two weeks’ time. In a spot of good news for Mercedes and Lewis Hamilton, Peter Bonnington returned from medical leave early.

Evidently he felt that he was fit enough to return to the team as Hamilton’s engineer. In all honesty, Bono must have been glad that he came back to witness his driver clinch his sixth title.

3. Early career started off as a data engineer:

Bonnington was previously Michael Schumacher’s race engineer when the 7-time world champion was in Mercedes. Bono started his Formula 1 career as a data engineer with Jordan back in the early 2000’s. He has worked alongside the likes of Giorgio Pantano and Timo Glock. The Englishman then joined the Honda team as an understudy to long time race engineer Jock Clear. Pete has inherited the nickname “Bono” in Formula 1 courtesy of his surname. Bonnington has been a part of Mercedes since the German manufacturer returned to the sport in 2010 and was also at the team when it won the 2009 title under the Brawn GP name

Bonnington has performed a key role alongside Lewis Hamilton during their seven-year tenure together at Mercedes. One common catchphrase of his was when he tells the Briton to push hard. Thus the phrase, “OK Lewis, it’s Hammertime.” was born, and Hamilton always complied.

5. Who says get in there Lewis?

Whenever Lewis Hamilton wins a race, there is always a familiar voice saying, “Get in there Lewis!”. Those who don’t know, the man is Peter Bonnington, who is Hamilton’s race engineer. Bonnington is largely regarded as the 6-time world champion’s right hand man.

6. He is lovingly called Bono by Lewis:

Hamilton has worked with Bonnington, known as ‘Bono’ within the team, since he joined Mercedes in 2013 and the pair have won four world championships together.

“I’ve had Bono by my side my whole time here at this team, and you can hear our rapport when we’re in a race,” the driver said.

“Bono is fantastic at managing, because there is a lot of commotion going on on the wall and everyone is saying tell him this or tell him that, and Bono knows what to filter. He is the best filter. He always comes across calm and cool and collected.”

A typical race engineer’s salary for new graduates starts at $42,000 to $50,000 and quickly progresses to junior engineer roles, earning more than $67,000 with just a few years’ experience. Senior race engineers earn $84,000 to $152,000, and promotion often leads to six-figure salaries.

With the exception of Nico Rosberg’s mini-tantrum in the immediate aftermath of the Chinese Grand Prix, the Mercedes drivers have behaved exceptionally well this season.
After tales of forbidden engine modes, supposedly sabotaged qualifying laps and on-track collisions dominated the last season, Rosberg and Lewis Hamilton have enjoyed a more cordial relationship in 2015.
Much of this, admittedly, has been down to the difference in class between the two drivers this season—Hamilton and Rosberg have rarely raced wheel-to-wheel across the first 11 races of the campaign—but the team’s management of the situation has been an integral part of the improved atmosphere.
Mercedes were taught some extremely hard lessons in 2014—especially at the Belgian GP, where Rosberg and Hamilton made contact, gifting victory to Red Bull’s Daniel Ricciardo—and it was fascinating how, upon their return to Spa-Francorchamps, the team forced their drivers to act responsibly.

Hamilton led Rosberg by around six seconds when, on Lap 30 per the FIA TV feed, the team called him into the pit lane for new tyres, with his race engineer, Pete Bonnington, stating: “OK Lewis, so box, box. Box, box. Pit confirm.”
The championship leader, however, was content with the condition of his Pirellis and—despite requesting a change of his front-wing angle only moments earlier—begged for one more lap.
“My tyres are still good,” he said. “Can I do one more?”
“Negative, Lewis. This is the fastest race,” Bonnington replied in an instant, before planting a seed in his driver’s mind. “Nico will take the stop otherwise…”
Faced with the prospect of his title rival inheriting the preferential strategy, Hamilton—with the memories of Monaco still very vivid—had no choice but to dive into the pit lane and follow his team’s orders.

While other teams may stick a fine or force their drivers to issue empty statements for disobeying their instructions, Mercedes will openly prey on their drivers’ worst nightmares.

Robinhood: How Does it Make Money?