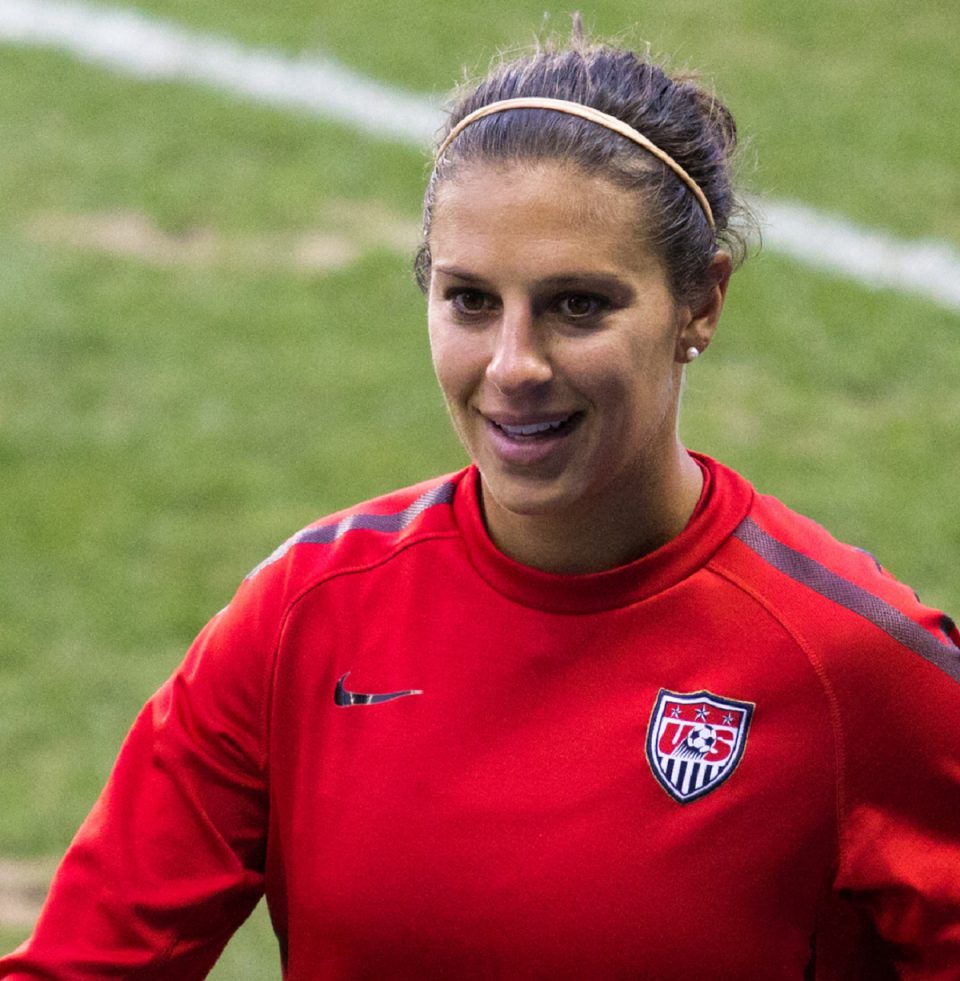 Carli Lloyd who wore the American “10” on her back is the eternal American “10” – always will be, no one can replace her. A phenomenon in American women’s soccer, Carli Lloyd scored the goals that won gold at the 2008 and 2012 Olympics tournament while becoming the first woman to score a hat-trick in a World Cup final match. The captain of the US national team (who won the 2019 World Cup with the US team) announced her international retirement with the United States. She is the second soccer player with the most international appearances and won two Olympic medals.  Her best moment was the 2015 World Cup final where she scored 3 of the 5 winning goals against Japan and was recognized with the World Cup Golden Ball and the Silver Boot for her 6 goals in the orbital event, only surpassed by the German Celia Sasic.

With a resume like this, you must be excited to learn some Carli Lloyd facts.

Who is Carli Lloyd? 10 Crazy Things About Her Life!

Carli Lloyd began her first steps when at the age of five she began to develop soccer skills on a practice field not far from her home in New Jersey and began practicing for long hours.

She learned to play football at Delran High School with Rudy Klobach, nicknamed “The Red Baron”. She played football at Rutgers University.

Lloyd then forged her character and upped her game during high school. In high school, she excelled and became a two-time Player of the Year. Lloyd’s career soon garnered much attention when she was selected three times for the NSCAA All-America team in addition to becoming Rutgers University’s all-time leading scorer.

The passage of time placed Lloyd in the US junior national team. Despite beginning to be recognized by the soccer player she was becoming, she thought about retiring from the sport due to the exclusion she suffered from the rest of the group.

Despite this, Carli made her first appearance for the US National Team in July 2005, in a match against Ukraine. Two years later, she made her first participation in a World Cup where she finished as world champion. She established herself as a fundamental piece of that team, which caused her to be involved in a leading role for the 2008 Olympics.

She became the first player, male or female, to score a game-winning goal in two consecutive Olympic Games.

Two of her goals went deep into the net to give the United States two gold medals at the 2008 Beijing Olympics and 2012 London Olympics. At Tokyo 2020, she was part of the team that won the bronze medal.

Lloyd became a two-time world champion with the United States Women’s National Team, where she also managed to be the second player with the most games played (299) and as the fourth highest scorer, with 124 goals.

During her first Olympic venture, she scored the lone goal with which the United States beat Japan in the group stage, then returned to the scoreboard in overtime to beat Brazil in the final. Her performance allowed her to be recognized as the US female soccer athlete of the year.

From that moment, her career focused on US national soccer, having gone through the Chicago Women’s Red Stars, Sky Blue and Atlanta Beat. In 2011 she became the Cpa World Champion for the second time. A year later, during London 2012, Lloyd started the Olympic tournament from the substitutes’ bench, but an injury to her teammate Shannon Boxx allowed her to return to the main lineup and the latter would become the hero of that tournament, scoring two goals in victory over Japan to become a two-time Olympic champion.

Carli Lloyd is the daughter of Stephen and Pamela Lloyd. Watch the video above which was a special message from Carli’s father as she got ready to play her final match for the U.S. Women’s National Team.

She married Brian Hollins in 2016.

After more than 20 years of a soccer career, Carli Lloyd announced her retirement in 2021 leaving aside one of the most outstanding women’s soccer careers in history. The soccer player’s decision was announced through the official Twitter account of the United States women’s national team.

Playing her 316th game with the USWNT is how Carli Lloyd will hang up her boots with the US team and go on to become a soccer legend, a sport that left the US international quite a bit.

In the hours prior to the duel that will represent the final goodbye for Lloyd, the USWNT team was calm and assured that she enjoyed each and every one of the moments on the court and that she always gave her best.

5. During the 2015 World Cup, Lloyd became the captain of the US national team:

In addition, she shone again with her participation in various scores for the national team. In addition to winning the joint title, she was awarded the Ballon d’Or for being the best soccer player in the competition.

After this achievement, Lloyd presented herself in 2016 to several of her teammates to protest and file a federal wage discrimination complaint. She currently has become one of the highest paid soccer players in the world. Well, in addition to her salary in the teams in which she has played, Lloyd has obtained millionaire agreements for her image, along with prestigious American sports brands.

During the last years of her career, Carli has become one of the main faces of women’s soccer and an ambassador for the sports brand Nike, with whom she has maintained a multi-year contract for her image.

Carli Lloyd once stood out for her pungent messages against Cristiano Ronaldo. We cannot tell if Cristiano Ronaldo follows the Women’s World Cup diligently, but the Juventus star has been interested in women’s football at least once in his life. The Portuguese striker knows perfectly well who Carli Lloyd is, striker for the United States team. It was she who offered the world title to the Americans four years ago by scoring a hat-trick in 16 minutes against Japan in the final (5-2). A performance that earned her the title of the best player in the world in 2015. It was during this ceremony that she met Cristiano Ronaldo. And the meeting was icy.

When approaching the American, the Portuguese had royally snubbed her. The reason was quickly found: the American had split several tweets against the behavior of the Portuguese a few years earlier. She rejoiced when Cristiano Ronaldo was “angry” or advised him, in particular, to “change sports”. “I can’t stand it,” she added in one of her tweets.

Much more a fan of Lionel Messi, with whom she had posed during the 2015 Golden Ball, she opposes the bling-bling side of the Portuguese, despite his good performances. The American media, for example, quickly preferred Alex Morgan, captain, and star of this team. The latter, passed by Lyon, had made the cover of Sports Illustrated.

Her self-sacrifice and her taste for work would however bring her closer to Cristiano Ronaldo, renowned for his unalterable activity. Like the Portuguese, she does not appreciate being relegated to the bench either, despite her 36 years which do not fit well with the intense attack plan concocted by coach Jill Ellis.

8. Lloyd was always the hardest working:

With the help of James Galanis, a former Australian pro who became her coach and, Lloyd said, her guru, she became a player good enough to appear in 22 Olympics matches and 25 World Cup matches garnering the most world championship appearances by a U.S. player.

Her 10 goals in Olympic competition are the highest by an American and Lloyd also scored 10 World Cup goals, including three in the first 17 minutes of the 2015 World Cup final.

“Carli Lloyd is a true legend,” said US coach Vlatko Andonovski, the fifth national coach she played under.

“Carli Lloyd’s career was unique and her success on the field is something all current and future players on the national team should aspire to achieve. The way she approached her daily training and her career as a professional is truly impressive and I have been honored to be her mentor.”

9. At her last match, Carli walked off the field revealing the REAL reason for her retirement:

Carli Lloyd, who was 39 at the time, started in her last match with the captain’s belt, and after 64 minutes the change occurred, which marked her farewell from the fields with her country’s team. The American was replaced by Alex Morgan and what followed was a long ritual to expose to the public one of her REAL reason for retiring:

On the journey that took her to the substitute bench, it all began with her removing her boots, then her shin guards, and finally she took off her shirt with the last name Lloyd, to come out with another one under it with her current husband’s last name Hollins.

It should be noted that Carli Lloyd has been married to golfer Brian Hollins since November 2016, but she continued to play under her birth name. When she flew to Tokyo saying she was undecided about retirement, she strongly hinted during the tournament that she had enough of missing her family. “I am not going to lie. I miss having a normal life,” she said. “I miss my home, my family, my friends. This is what sportwomen sacrifice every four years, every five years. It’s all part of it…..Eventually, it comes to an end, but we savor every moment.”

As you can see, Lloyd recently reconciled with her family after a decade apart and said making up for lost time figured into this decision. Lloyd, who was married six years ago, also said that she wants to start a family.

“I know my husband is anxiously waiting for me to unplug,” the Captain passionately stated.

Her last match ended 6-0 with goals from Lindsey Horan, goals against Cho So-Hyun, Alex Morgan, Megan Rapinoe, Rose Lavelle and Lynn Williams. In this way, the United States fired a soccer player who won 2 gold medals at the Olympic Games (2008, 2012) and 2 FIFA Women’s World Cups (2015, 2019). From now on, the number 10 of the US team has been taken by Lindsey Horan. For now, Carli Hollins will take a long and well-deserved break.

After the final whistle of her match against South Korea, Carli Lloyd will have left behind a historic legacy with the USWNT and will begin to focus on her new life in which she plans to start a family and dedicate herself to everything she is passionate about, for which does not rule out continuing to be related to football.

“This next stage, I think, will be no different. I’m going to find something I’m passionate about and do the best I can. Eventually I also want to start a family with my husband and I want to be the best mom and strive to be the best wife I can.” Lloyd noted.

Stocks vs. Forex – What are the Main Differences?

How To Protect Your Hair On Holiday – Men’s Guide

Flavia Pennetta: Life and Career of the Italian Tennis Star