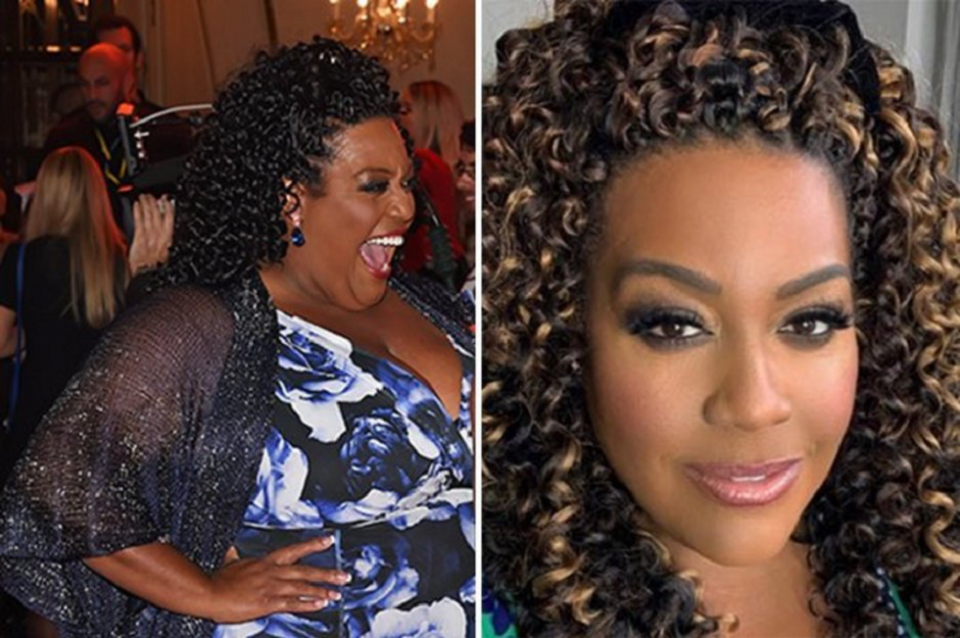 Alison Hammond is the British television presenter who has made a career of regularly interviewing celebrities, marrying them, and even taking vodka shots with Ryan Gosling and Harrison Ford for the popular daytime show, This Morning. Before all that, Alison popped up on everyone’s radar after appearing on three shows including the third series of Big Brother (alongside Kate Lawler, Jade Goody and Jonathan Regan), I’m a Celebrity… Get Me Out of Here! and Strictly Come Dancing.

Alison was revealed to be one of the celebrity contestants on this year’s The Great Celebrity Bake Off: Stand Up to Cancer, alongside Love Island’s Ovie Soko, James Blunt, Scarlett Moffatt, and other big names. The five-part series airs later this year.

Within the last couple of years, the comically talented, confident presenter showcased a dramatically slimmed-down figure on The Chase: Celebrity Special. How did she achieve her weight loss? She previously admitted that juggling life as a single mum with a busy career had meant that she didn’t have much time to focus on herself or her healthy living. But this is Alison Hammond’s weight loss journey over the years:

Why Did Alison Hammond Want To Lose Weight?

When the television personality admitted that she felt embarrassed by her 20 stone frame, she decided it was time to shape up. Her diet consisted of chicken and spinach dishes or beef mince and cauliflower rice, while she snacked on bananas or bowls of yogurt and berries.

But she’s also allowed herself a few cheat days, showing herself enjoying some chocolate cake in one post.

The Weight Watchers program that Alison follows not only has helped her shed the pounds, but the television personality also revealed that the diet programme helped to grow her confidence. The diet within the program is a well-balanced diet, which is less restrictive than many of its competitors. It has a range of products and cooks books, including vegan and vegetarian, keeping it inclusive like other dieting programmes.

No foods are completely banned, meaning that dieters shouldn’t be tempted to cheat on the plan. We can safely assume that Alison has been sticking to this type of diet plan to lose weight.

An NHS study conducted in 2012, found that men and women who attended WW classes lost more than those who went to other slimming cubs.

Thanks to the ease of using the WW programme,  Alison Hammond said it was “the only programme that works for me”.

In a post on Alison’s Instagram page, she said: “I know this may sound a bit corny but I’m so happy doing @ww.uk as it’s given me the confidence to just embrace myself fully.”

As well as focussing on a much healthier diet, Alison has given fans a look into her exercise routine by posting workout videos to her social media page. The English celebrity posted an exercise video to her Instagram, captioning the image: “Come train with me and @ellisgatfield, are you ready babes? Let’s do this. Trainer and client who train together stay together!”

Alison herself has already made some healthier lifestyle changes, following her determination to lose weight.

She said: “I’ve got a new lease of life. I’m eating healthier, have more energy, and I’m even taking part in some form of exercise every day….”I’ve also been inspired by the thousands of members who regularly share updates on their journeys and I really believe that we need to spread this positive feeling beyond members and into the wider community.”

The television host also added: “These little life moments are the things that need recognition….”They are worth celebrating and keep people motivated, whether that means reaching a significant weight loss goal, completing an activity they never thought they could, or dramatically improving their own health and fitness.”

Meanwhile to inspire others, the ITV host has been taking her Instagram followers every step of the way with constant videos of her hardcore gym workouts and snaps of the healthy foods she’s been eating.

In a string of clips from earlier this month she can be seen lifting weights as her personal trainer encourages her.

Another video sees her power walking while motivational classic Eye of the Tiger plays in the background.

On 19 November 2015 it was announced that Alison would enter the annual Strictly Christmas Special. But by 2016, Alison told Bella magazine she felt disheartened after struggling with her weight for a number of years.

“It’s the one thing in my life that I feel like I can’t achieve. When you get really big like me, you don’t see any light at the end of the tunnel,” she stated.

“I need to do it in small stages. If I just try and live healthily and drink lots of water, the weight loss will come. If I lose one or two stones, it’s not going to be obvious to anybody, but I’ll feel better in myself.”

Alison made a new year’s resolution to lose weight as she started in January 2019, when she introduced fans to her “new best friend” personal trainer Ellis Gatfield. Sharing a selfie of her with Ellis with her fans, the British host explained the fat loss expert was on hand to “get that feel good factor back in my life through fitness”.

Then, after four months of personal training sessions, Weight Watchers announced that Alison Hammond would be an ambassador for the weight loss programme. The 44-year-old star was unveiled back in April when she came in at 20-stone on the scales.

Following the programme, Alison revealed that she had changed her eating and exercise plans. Fans were quick to notice her slimmer figure and praised her online.

The single mum who had her son Aiden, 14, admitted her busy lifestyle has distracted her from making a change in the past. Alison said: “It’s been 17 years since I began working in TV, and I’m busier than ever, especially juggling my duties as a mum. “WW is the only programme that works for me, with the Online WW Coach there for support whenever you need it, 24 hours a day.” Alison previously confessed that her 20 stone weight left her “embarrassed”.

Fans began to notice a dramatic difference in Alison when she shared a photo of herself in June. Showing off her incredible results, Alison shared the selfie on her Instagram and Twitter pages and even made it her new profile pic on Twitter.

Fans then came swarming in on her comments section with endless compliments, with one even comparing the bubbly host to Beyonce:

“Absolutely beautiful but you are inside and out, what a star you are, have us all in tears with laughter good luck on your journey [sic],” one fan wrote.

While another added: “Omg, how much weight have you lost, you look amazing!!”

Alison started her weight loss journey last year – but she says that since her mum passed away on 14 February this year, it’s taken a back seat

Alison previously weighed 20st and was aiming to be 12st and a “size 14 or 16”- but now she says: “I’m off it at the moment … there is no weight loss…..”I’m eating the right food and going to the gym and I have a personal trainer. I’m not saying I’m happy with everything – but I’m happy in my own skin.”

A Perfect Host To Inspire The Most

TV presenter Alison Hammond has opened up about her incredible weight loss journey – and given a message of support to others who are also trying to shed the pounds. The charming, comically talented ITV presenter surprised 12 unsuspecting WW members with a FaceTime call to say congratulations on their achievements so far.

Alison congratulated them on their achievements, including a couple who have jointly lost 100lbs, a woman who now feels confident enough to wear a bikini and a member who has transformed her life to become a personal trainer.

After shedding almost half of his body weight, Mike from WW says he now feels like a whole different person. He said: “My confidence has grown immeasurably since I began my WW journey. When I first joined, I could barely walk up a flight of stairs without being out of breath. Now, I can walk my dogs and do all kinds of exercise – it’s amazing how much energy I have.”

Alison also had a chat with Maria Dawson, a WW member who’s hopeful of becoming a future mom. Having been told that she would need to lower her BMI in order to have IVF treatment, Maria sought out her nearest WW Workshop and her partner Ben also joined to support her.

The answer is not to join any type of group or gym, unless you find it helpful, this isn’t a promotion for Weight Watchers. Exercising upto 4 days in a week, and eating a well balanced diet are the key pointers to take away from Alison Hammond’s weight loss. Please be mindful of your body and any preexisting aches, pains and injuries. Keep your goals in mind, try not to waiver from it, and achieve the body of your dreams. More importantly, get a routine going that will help nutritious food and movement be a part of your lifestyle.

Where is Alison Hammond from?

Alison Hammond’s father and mother are both Jamaican. She was formerly a holiday representative and holiday entertainer, who worked in Tunisia, amongst other resorts. She also worked as a cinema usherette, an Administrator at Transco and a child actress. Alison Hammond resides in Birmingham, her home city. She has a son named Aiden who is 14 years old.

No, Alison famously ‘married’ The Rock in a fake joke wedding on This Morning in 2017, and says that when she gets married again, she wants it to be a huge occasion. The presenter said:

“Without a doubt I want the white wedding and I want the big dress…..”Obviously I’ve had it with The Rock already, but I want it bigger! I want a bigger dress and I want about 25 bridesmaids….”I’d have a couple of weddings to be honest – one abroad and one here. And the year after we get married, we’ll probably renew our vows.

The This Morning presenter was recently spotted in March 2020 looking cosy with audio visual technician and aspiring actor Ben Kusi, who she met on the E4 dating show. The ITV host even enjoyed a first date making pottery with single Ben Kusi. She was also spotted linking arms with her new man on a romantic day out after saying she’d “found love”.

The ITV presenter, 45, grinned from ear to ear and giggled with hunk Ben Kusi, 41, as they strolled along the street in London.

Before going on her date with Ben on Celebs Go Dating, Alison wanted to be prepared for a potential kiss and practised her kissing technique on Celebs Go Dating agent Anna Williamson. The bubbly TV personality described her dream man on the show: “My dream guy has to be respectful and kind, and he has to be really good at massaging my feet, massaging is quite important.”

“He’s also got to be someone who thinks about me, all the nice qualities I’ve ever wanted. Someone who’s caring and might run my bath for me or cook for me when I get home.”