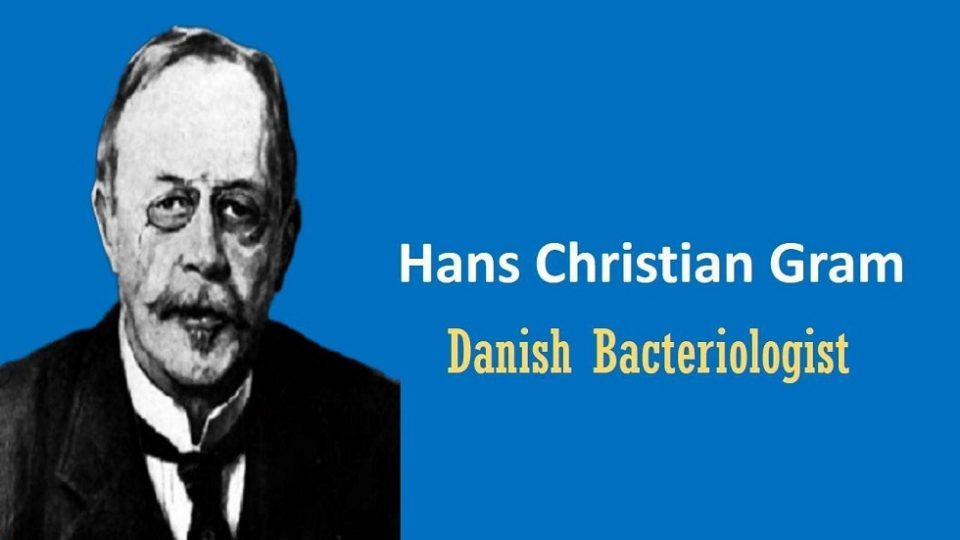 Hans Christian Gram who invented the Gram staining technique, was a pioneering biologist responsible for a seminal innovation essential for observing bacteria under the microscope. He was the man who devised the system of classification which led to as many as 30,000 formally named species of bacteria being investigated. His method remains widely used eight decades after his death, cementing his legacy in the world of microbiology. Here are 8 facts about him that might interest you.

1. He was Danish and loved Botany:

Born on 13 September, 1853, Gram grew up in Denmark. He earned his MD from the University of Copenhagen prior to working as a resident physician in the city’s municipal hospital. Here he was an assistant in botany. His study of plants introduced him to the fundamentals of pharmacology and the use of the microscope.

2. He made history in Berlin:

Hans Christian Gram began medical school in 1878 and graduated in 1883. He then travelled around Europe between 1878 and 1885 while expanding his expertise in bacteriology and pharmacology. It was while working in Berlin, in 1884 he discovered something in the laboratory of microbiologist Karl Friedländer.

He invented a method for distinguishing two major classes of bacteria. This technique is still known as one of the most important staining techniques used in microbiology to identify bacteria under a microscope.

The stain method was published in a journal in 1884, from where the terms Gram-positive and Gram-negative were coined. His famous technique is called the Gram stain, which continues to be a standard procedure in medical microbiology.

Hans Christian Gram coined the Gram stain technique. Its widely used microbiological staining technique greatly aids in the identification and characterization of bacteria. The reaction reflects fundamental differences in the biochemical and structural properties of bacteria.

Gram first dripped reagents, a substance designed to cause a chemical reaction, onto lung tissue samples from patients at a hospital in Berlin, who had died of pneumonia, discovered that certain stains were preferentially taken up and retained by bacterial cells. He found variations in the colouring of bacteria that are now known to be Streptococcus pneumoniae and Klebsiella pneumoniae. The differences that he would observe are a result of the composition of the bacterial cell wall.

A slide containing bacterial cells is treated with crystal-violet stain (a basic dye), during which the cells turn purple. The slide is then flushed with an iodine solution, followed by an organic solvent (such as alcohol or acetone). Each and every gram-positive bacteria will remain purple because they have a single thick cell wall that is not easily penetrated by the solvent. On the other hand, gram-negative bacteria are decolorized because they have cell walls with much thinner layers that allow removal of the dye by the solvent. In a final step, a counterstain, such as safranin, is added and stains the gram-negative cells red.

In his initial publication he remarked, “I have therefore published the method, although I am aware that as yet it is very defective and imperfect; but it is hoped that also in the hands of other investigators it will turn out to be useful.”

5. Gram stain technique has been both applicable and debated:

Although his technique peaked between 1940 and 1960, it has been used more and more since then.

Pierce Gardner, an associate professor of medicine at Harvard Medical School, penned a statement about the Gram stain and its interpretation in 1974: “It is our feeling that the Gram-stained smear should be considered part of the physical examination of the patient with an acute bacterial infection and belongs in the repertoire of all physicians delivering primary care in acutely ill patients.”

Quite recently, Gram staining has been used to help identify new antibiotics, which are key in the battle against antimicrobial resistance. Teixobactin – a new antibiotic released to the pharmaceutical market in 2015 – was identified by employing a new twist on a tried and tested method of screening soil for bacteria that have evolved to kill their competitors. The results came from a team at Northwestern University in Boston, Massachusetts that screened 50,000 types of soil-dwelling bacteria for antibiotics that killed bugs like the hospital acquired infection MRSA and the bacteria that cause multi-drug resistant TB.

Most notably, Hans Christian Gram staining technique was important as the screen identified teixobactin, which seems to act on the “gram-positive” group of bacteria by targeting a lipid on their cell walls, along with other molecules. With error free usage, the researchers behind the discovery of teixobactin could be a viable treatment option for bacterial diseases – and safe from the threat of resistance – for at least 30 years.

While differentiating bacteria into either gram-positive or -negative is fundamental to most bacterial identification systems, researchers these days are known to debate about the Gram staining method. They say it is prone to error and “is poorly controlled and lacks standardisation” – something Gram himself warned of when his work was published in 1884.

6. He didn’t intend on distinguishing bacteria at first:

Gram’s initial work was concerning the study of red blood cells in men. He also was among the first to recognize that macrocytes were characteristic of pernicious anemia.

7. He came back to teach in the same university he graduated from:

8. You can check out his amazing grave:

Gram took to retirement in 1923 and died in 1938 at 85 years old. With the help of his great-granddaugher Lone Gram, an accomplished microbiologist herself, you can take a historical stroll through the astonishing Assistens Kirkegård (Cemetery) and locate Gram’s grave, marked by a simple engraved stone among lush greenery. A fitting remembrance of this modest yet most influential microbiologist.

The Gram staining technique is extensively used even after eight decades of his death, forever planting his legacy in the annals of the history of microbiology. The blossoming technique is often amongst the first laboratory experiments performed by young biology students at school.