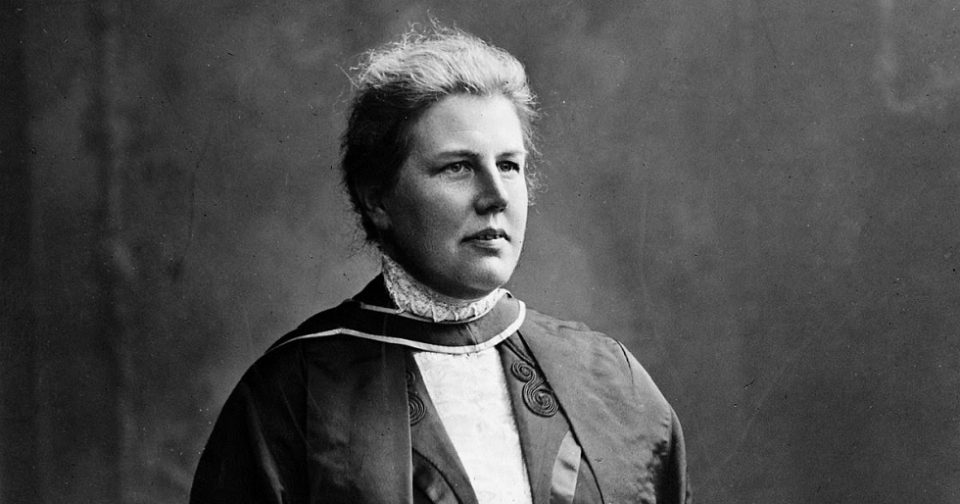 Dame Louisa Brandreth Aldrich-Blake DBE was Britain’s first ever female surgeon. She also holds the distinction of being one of the first female entrants into modern medicine from Britain.  Born in Chingford, a modern day district of London but a rural section of the Essex parish at that time, Louisa Aldrich-Blake was one of six children and the eldest daughter of a curate. Louisa Aldrich-Blake studied at the Royal Free Hospital and graduated with a degree in medicine in 1893. This was an extreme rarity among British women at that time. She carved her own path and went on to attain a Master of Surgery degree and became a lead surgeon by 1910. Louisa Aldrich-Blake also volunteered for military medical service when the fires of the First World War were raging across all corners of the globe. To recognize her commitment and commemorate her life’s achievements, her statue was erected at Tavistock Square, London. The statue is very close to the Royal Free Hospital, her alma mater. On the occasion of her 154th birthday, Google released a doodle to celebrate her incredible life and career.

Louisa Aldrich-Blake: All You Need To Know

When was Louisa Aldrich-Blake born?

Where did Louisa Aldrich-Blake live?

Louisa Aldrich-Blake moved with her family to Welsh Bicknor in Herefordshire during her childhood, and maintained a home in the town until her death. Throughout her career, Aldrich-Blake was associated with the Elizabeth Garrett Anderson Hospital, becoming senior surgeon in 1910.

Where did Louisa Aldrich-Blake study?

Louisa Aldrich-Blake began her school education at Cheltenham Ladies’ College. She graduated with first-class honours from the London School of Medicine for Women by 1894 as a Bachelor of Science, Bachelor of Medicine and an MD. Upon graduating from the University of London Aldrich-Blake followed with a masters in surgery a year later. She went on to take the University of London’s higher degrees in Medicine and Surgery. In the process, she achieved the distinction of being the first ever British woman to become a Master of Surgery.

Where did Louisa Aldrich-Blake work?

The newly qualified Louisa Aldrich-Blake began work at the New Hospital for Women and Children in London. She worked her way up to become the lead surgeon while also working at the city’s Royal Free Hospital. At the Royal Free Hospital, she was the first woman to hold the post of surgical registrar in 1895 and also acted as an anaesthetist. She held the position of consulting surgeon at the Royal Free from 1919 until her death in 1925. She also worked at the Canning Town Women’s Settlement Hospital.

Between 1914 and 1919, a lot of Britain’s male surgeons were deployed on foreign active service during the First World War. During this time, Dr. Aldrich-Blake took on increased responsibility for the surgery. She became a consulting surgeon at the hospital. Aldrich-Blake spent multiple holidays aiding the military hospitals in 1914 to 1916, specifically in France with Dr Frances Ivens from the Anglo-French Red Cross Hospital and helped out as a visiting surgeon at the Women’s Army Auxiliary Corps Hospital.

Her time was also spent contacting other women in the profession to organise volunteer units. She approached every woman on the Medical Register to ask if they would consider volunteering for the Royal Army Medical Corps, and 48 enrolled, many of whom were sent to Malta.

Aldrich-Blake was the first to perform operations for cervical and rectal cancers. She led the British surgeons in taking on the Wertheim operation for carcinoma of the cervix. Aldrich-Blake added a piece to the Practitioner’s Encyclopedia of Midwifery and Diseases of Women named “Pain as a symptom of pelvic trouble” and a piece on “Abdomino-perineal excision of the rectum by a new method” in the British Medical Journal in 1903. She held a chair position as a vice-president of the Section of Obstetrics and Gynaecology in 1924 that was a part of the British Medical Association.

Although she did practice medicine professionally, Aldrich-Blake never received a sizeable salary for her work.

What was Louisa Aldrich-Blake’s nickname?

Louisa Aldrich-Blake was nicknamed “Madame la Générale” by her patients.

Where did Louisa Aldrich-Blake teach?

Louisa Aldrich-Blake was devoted to training students at her alma mater, the London School of Medicine for Women (now the medical school of University College London). She became Vice-Dean in 1906 and Dean of the School in 1914. Aldrich-Blake’s encouragement for women to join the medical field increased the school’s population by almost double during the First World War.

When did Louisa Aldrich-Blake die?

Aldrich-Blake died on 28 December 1925 from cancer at home having undergone several operations during previous weeks. In the year of her death, Aldrich-Blake was named a Dame Commander of the Order of the British Empire on the New Year’s Honours List in 1925. St Pancras Church, in London, celebrated her life on 1 January 1926 and her ashes were transferred back to her home in Welsh Bicknor.

What is Louisa Aldrich-Blake’s legacy?

The Dame Louisa Brandreth Aldrich-Blake Collection is located in the Royal Free Hospital’s Archives Centre. A statue of her is in Tavistock Square, London. Her career was highlighted in a 2015 exhibit specifically related to her actions in the First World War where she performed surgery on the front line and encouraged other women to join the field. She also influenced the War Office to allow women to enlist to be a part of the medical staff. In 2019, she was acknowledged with a Google Doodle for the UK, Ireland, Canada, Australia, New Zealand, Israel, Bulgaria, Sweden, Denmark, Estonia, and Iceland on the 154th anniversary of her birth.

Dame Louisa Aldrich-Blake was the first ever British female surgeon. She was a true pioneer, a trailblazer for women (a lot like Evelyn Dove did for women of colour later) in a field which was completely dominated by men. Aside from her immense contribution in paving the way for women in surgery, she also brought about a lot of other medical breakthroughs.

She was born in Essex, one of six children. She would retain a commitment to her home of Chingford throughout her life.

But it was in 1887, when she entered the London School of Medicine for Women with the aim of becoming a surgeon that the work that would define her life and her trailblazing path through medicine. She graduated with a series of degrees at the highest level, and in 1895 became the first ever woman to get the master of surgery or MS.

It was the London School of Medicine for Women, which had the Royal Free as its teaching hospital, that she would become most closely associated with. She eventually became its dean and saw it through the First World War, when it doubled in size as women undertook medical training to help with the war effort, which she also helped out with more directly.

Aldrich-Blake did not seem to see herself as a campaigning feminist. Instead, she aimed to help women’s place by her pioneering work, and stressing to her students that they could do the same.

She was able to operate at the very leading edge of surgery with her pioneering approach. In 1903, she published a paper discussing a new treatment for rectal cancer, and she was one of the first surgeons in Britain to undertake innovative surgery to treat carcinoma of the cervix.

Here’s what Google’s blog said about Louisa Aldrich-Blake for her doodle that was launched on August 15, 2019:

“When you start a thing you must finish it.” This was the motto by which British physician Louisa Aldrich-Blake lived, which served her well while she developed innovative surgical techniques, saved the lives of soldiers during World War I, and broke down barriers for women entering the medical profession. Today’s Doodle celebrates the birth of Britain’s first female surgeon on this day in 1865.

At age 22, Dr. Aldrich-Blake enrolled in the London School of Medicine for Women intending to do “something useful.” She went on to earn a gold medal for surgery in 1893 and an M.D. in 1894, becoming the first woman certified as Master of Surgery in English history a year later.

Her 1903 paper detailing an innovative treatment for rectal cancer was published in the British Medical Journal. From 1910-1925, she practiced surgery at the Elizabeth Garrett Anderson Hospital and worked at the Royal Free Hospital where she became the first female surgical registrar, anesthetist, and lecturer on anesthetics.

During the First World War, Dr. Aldrich-Blake spent her holidays working with the Anglo-French Red Cross in a field hospital near Paris where patients called her “Madame Générale.” Defying critics who questioned whether women belonged in military hospitals, she personally wrote to every female doctor she knew, encouraging them to volunteer and inspiring many young women to enroll in medical school.

In 1925, Dr. Louisa Aldrich-Blake was named a Dame of the British Empire, and a statue was erected in her honor near the headquarters of the British Medical Association.”

Ynés Mexia: Many Don’t Realize How Much We Owe To This Botanist