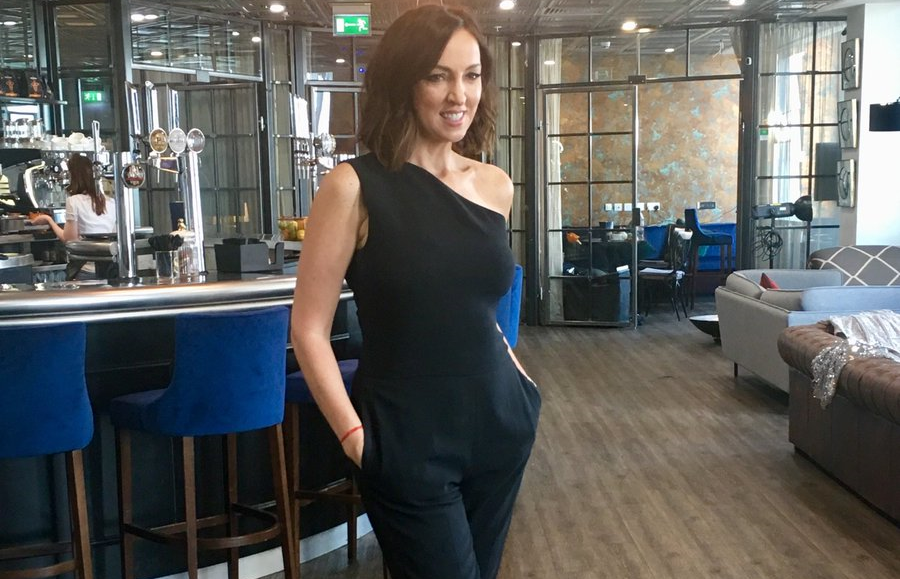 English broadcast and news reporter Sally Nugent has been a familiar face of the BBC News over 15 years. The journalist is best known for her long-standing career with BBC. She’s been a journalist for BBC North West Tonight, BBC News, and BBC Weekend News. Here’s the presenter’s biography, personal life and other trivia.

Sally Nugent: Bio And Facts About The BBC Presenter

Sally Nugent was born on 5th August 1971 on the Wirral Peninsula. She was born in Birkenhead, the United Kingdom. The English newsreader who works for BBC News went to school at Upton Hall School FCJ. Later Nugent graduated with a Bachelor of Arts in Communication Arts and French from the University of Huddersfield.

Sally Nugent hails from strong athletic genes with a father who played rugby and a mother who was a tennis coach. Therfore, she was influenced by sports since her childhood

Nugent also has a brother who grew up playing rugby with their dad. Raised in such a  household, Sally loves watching sports and later picked sports journalism as her future career. Her family played sports regularly.

There was an interesting rumour that Sally Nugent started reporting in the field of sports after she started having an interest in Willie Mullins, an Irish jockey.

Sally’s 15 year career began as a broadcast journalist at her local radio station – BBC Radio Merseyside before moving on to report on and read the sports news on BBC North West Tonight. The English reporter moved to the regional television newsroom and when their sports presenter took a short break, they asked her to step in for six weeks. She remained there for two years.

Her family’s sports loving background influenced her initial passions. In her earlier days, Sally covered many big stories including the Grand National that never aired in 1997.

Sally Nugent went  towards the regional television newsroom when their sports presenter took a short break and asked her to step in for six weeks. She remained there for two years. Upon starting her work there, Sally travelled around Europe as Liverpool went on their fairytale UEFA Cup campaign in 2001, which ended in success! Liverpool beat Alaves 5-4 in the final after extra time and a golden own goal!

Sally gained fame and became a familiar face after covering the 2002 Commonwealth Games in Manchester – broadcasting live every night. The journalist saw the effect a big sporting event can have on a region and its people.

In 2003, Sally Nugent became a sports reporter for BBC News, and was seen on national bulletins, before becoming a sports news presenter on the BBC News Channel (known back then as BBC News 24).

Sally Nugent travelled to Germany for the 2006 World Cup, anchoring Sportsday from there. It was here that she moved to national news.

Covering the second big sporting event, Sally was headed to the 2010 FIFA World Cup in South Africa. The journalist saw her career rise but says it’s not always as glamorous as it looks. In Cape Town in South Africa, her studio was a tiny portacabin with no heating. In the middle of an African winter she reported most evenings with a big fluffy blanket over her knees – and a tiny electric heater on full blast!

After the 2010 South Africa World Cup, Sally delibratly searched for somewhere in the world where football was making a real difference to people’s lives. Nugent then suddenly shifted from sports to being a news correspondent on TV and radio, and as a relief presenter on the BBC News Channel. That place was Iraq.

In Iraq, the national football team continued to play despite wars, bombings and huge religious divides between them. This resulted in all the  players becoming terrorist targets simply by being on the team – yet they all took risks simply to play in their national shirt. She was privileged enough to spend some time with them, travelling around northern Iraq as they prepared for a big tournament.

In November 2011, Nugent began co-presenting BBC Breakfast on a freelance basis, filling in when regular hosts were unavailable.

In April 2012, the English reporter presented sports bulletins with Mike Bushell on BBC Breakfast, when the programme moved to its new home at Media City in Salford.

The same year, Sally Nugent became the main relief presenter on the show and presented the show on Christmas Eve with Bill Turnbull.

A presenter for BBC Breakfast, Sally Nugent was in the news in November 2016 for helping fellow presenter Victoria Fritz after she went into labour unexpectedly on live TV at the end of a broadcast. Ms Fritz’s husband Dan Fritz was stuck in traffic so her colleague, Sally, filled in the shoes of her husband as a birthing partner at the hospital until he could get there.

Speaking of stepping in for others, Sally Nugent also had to step in when Good Morning Britain presenter Susanna Reid left BBC Breakfast to join ITV in 2014, filling in while a permanent replacement was sought.

What age is Sally Nugent?

Who is the female presenter on BBC Breakfast?

BBC Breakfast’s current main presenters are: Charlie Stayt (since 2008), Louise Minchin (since 2012) and Naga Munchetty (since 2014). Nugent would co-presented the program BBC Breakfast when regular hosts were unavailable due to unexpected incidents.

For example, when BBC Breakfast’s Louise Minchin fell ill mid-show in 2017, she was to be replaced by super-sub Sally Nugent (who knows all about stepping in after once becoming co-presenter’s birthing partner!)

Ms Minchin, an amateur triathlete competed in the standard distance event (1500 m swim, a 40 km bike ride and a 10 km run) at the World Triathlon Championships in Chicago on 19 September 2015.

Since 2006, Minchin has been a regular anchor on the BBC One programme Breakfast so it was no surprise that she was flooded with messages from concerned viewers about her sudden absence from the screen. She was quickly replaced halfway through the three-hour programme, with news and sports reader Sally Nugent stepping in to join co-host Dan Walker on the sofa.

BBC Breakfast praised the performance of last-minute ‘super-sub’ Sally and she, herself, later took to Twitter to joke that she was ‘the new David Fairclough’, a reference to the former Liverpool footballer who became famous as a goalscoring ‘Supersub’ in the club’s halcyon days during the late Seventies and early Eighties.

Her stepping in to host came in handy as Sally went on to regularly appear as a sports presenter on the show BBC Weekend Newscast on BBC One. From the 15th of April 2018, she is again back on the show BBC Breakfast, which she excitedly tweeted as well.

A Step-by-Step Guide To Sublimation Printing On Products