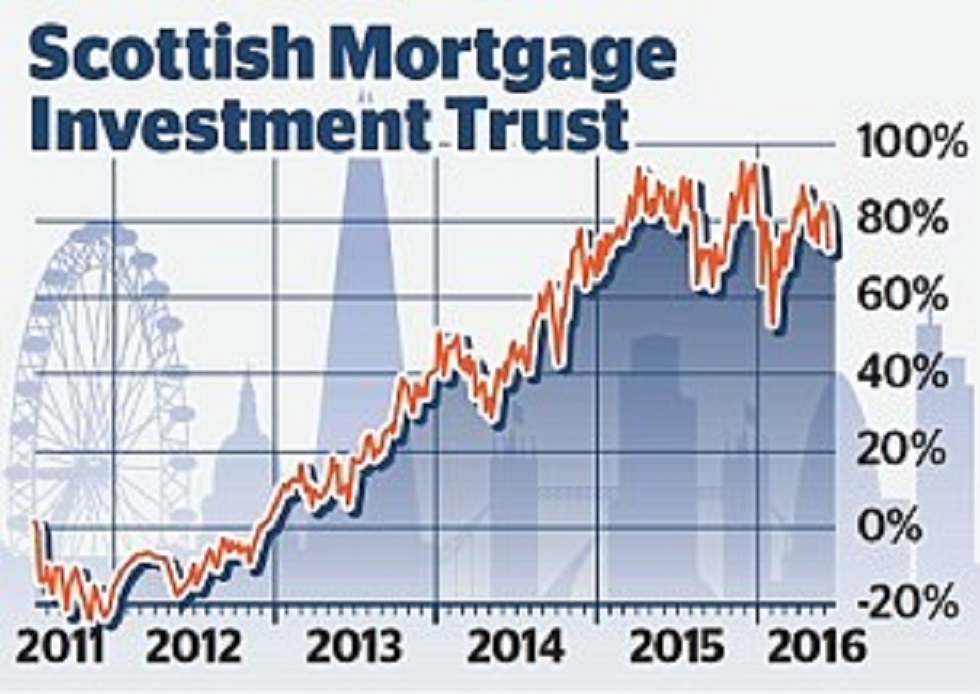 Scottish Mortgage Investment Trust’s origins lie in the Panic of 1907, a major credit crisis. During the early 1900s, Henry Ford’s Model T had given wheels to the general public. In the year 1909, the increasing popularity of the motorcar increased the demand for tyres. The rubber plantation owners of Southeast Asia were keen to exploit this growing demand. However, credit was still very difficult to obtain. A newly formed legal partnership between Colonel Augustus Baillie and Carlyle Gifford (which ultimately became Baillie Gifford & Co) in Edinburgh, spotted an opportunity. They quickly formed The Straits Mortgage and Trust Company Limited to and started lending money to the planters, using the estates themselves as security.

The credit crisis ended within the next two years, and the rubber plantations were no longer in need of large scale financing from Straits Mortgage. As a result, the Trust widened its investment remit to include global bond and equity markets. In the year 1913, the Trust’s name was changed to The Scottish Mortgage and Trust Company Limited.

“By 1913 it was obvious the future of the trust lay in operating as a normal investment trust – that is to say, one which invested in a broad range of securities, very largely overseas, as was typical of Scottish investment trusts of the period, with a strong bias towards North America – rather than the Rubber plantation specialist that had originally been envisaged. In recognition of this, the Board decided to change its name to “The Scottish Mortgage and Trust Limited”; this change of name received official approval on 31 May 1913.”

Early investments of the firm were a reflection of the rapid global industrialisation that characterised the period, including shares in oil and railway companies, along with loans to the Ottoman, Indian, Chinese and Argentine governments.

The portfolio of Scottish Mortgage has featured North American investments from early on. These investments were substantially augmented during the mid 1930s with the proceeds from European investments which were sold because of the worsening political situation. By the year 1940, 22 percent of the firm’s portfolio was invested in American names. Soon, Scottish Mortgage was forced to sell and repatriate all of its American securities because of a British Government mandate. This formidable exercise was overseen by Carlyle Gifford. US based holdings fell to 6.6 percent by 1942 and would not see a substantial increase till the 1950s. The proportion invested in the US fell to 6.6 per cent by 1942, not to be rebuilt until the 1950s. In 1957, the chairman noted, “…we have over 44 per cent of our assets…in USA and Canada. Indeed, a higher proportion would have been even better”.

During the 60s, the Trust was among the first to jump on the Japanese Market as a result of the lifting of restrictions on foreign investment. While it was a good business decision, it was also controversial because of fresh war time memories.

The UK allocation of the invested amount also varied during this time. In the 70s, the UK bonds and equities fell to 45 percent from 63 percent in 1972.  The decline was a reflection of the falls of the British stock market. It also reflected a pre-meditated move away from Great Britain. The chairman expressed his exasperation through this statement: “The fact is that this country has got itself into a really dreadful mess… We continue to have more confidence in investment prospects overseas than in the UK”.

1933 was the first and only time that Scottish Mortgage cut its dividend. This was caused by the ravaging of the portfolio because of the Great Depression. Every other year except 1933, Scottish Mortgage either maintained its dividend or boosted it. In 1942, the chairman wrote about the understatement of “some important adverse influences… Our revenue has suffered from the almost complete stoppage of dividends from the invaded areas.

Scottish Mortgage Investment Trust completed 100 successful years in 2009. Its investments continue to reflect the global-nature of the firm. Its holdings exist in rapidly developing economies such as Brazil and China. As of 30 September 2018, the Scottish Mortgage Investment Trust’s net assets are worth £7.6 billion and it continues to inspire firms which can help build assets at a smaller scale and help people fulfil goals such as retiring at the age of 50.

But beneath the apparent stability there has been a step change in  commitment to venture capital, which the Trust believe matters considerably for its future prospects, deeply differentiates Scottish Mortgage from its peers and requires nuanced explanation. Given that the percentage of assets in Scottish Mortgage Investment Trust’s unquoted equities has only increased from 15 per cent to 17 per cent and the attention the Trust paid to reporting on these assets at the half-year stage, it may appear that the Trust is becoming excessively focused on this segment but this underestimates its structural importance. Currently 34 per cent of the assets started out as investments in private companies, even if some of those are now public. Up until now the Trust has been reluctant to stress this area too heavily because its own education in venture capital was incomplete. The Scottish Mortgage Investment Trust has now become more convinced in its abilities and advantages in this comparatively new and different area. In fact, the Trust is thrilled with what it has learnt. The opportunity is greater than initially perceived. It’s the Trust’s responsibility to take advantage of this favourable combination of circumstances.

The starting point is that the Scottish Mortgage Investment Trust has outstanding access to unquoted companies across the world. This may be illustrated by some of its new purchases in the last 12 months. The only unquoted holding amongst its top ten overall is Ant Financial, which amongst other attributes runs both Alipay, the largest global mobile payments platform and Yu’e Bao, the world’s largest money market fund. The Scottish Mortgage Investment Trust’s access came about through its faithful ownership of Ant’s parent Alibaba from the days it too was a private company. Similarly the recent purchase of a holding in SpaceX would have been unimaginable without the Trust’s patient, controversial and unashamed backing of Tesla. Perhaps there is a need to move on from pride in being a rare truly global fund to embarrassment at being so limited in ambitions.

But lest it be thought that the unquoted portfolio is solely a reflection of the Trust’s committed ownership of public companies it may be worth citing another area where the Trust has substantially increased its exposure in the past year. This is the crossover between genomics and large scale, but individual, data observation in healthcare. Although Flatiron, one of the Trust’s initial forays in this direction, was purchased by Roche in early 2018, its continued progress illustrates the reality of clinical utility in this area. The Scottish Mortgage Investment Trust has added holdings in Tempus and Recursion that are emblematic of accelerated efforts and medical hope through such techniques.

The Scottish Mortgage Investment Trust’s purpose in unquoted equities goes further than obtaining access to a new universe of opportunity for its shareholders. The Trust is doing so at a cost that is structurally lower than that available elsewhere. The Trust asks no higher fee for incorporating unquoted equities. The overall ongoing charges of 0.37 per cent compares with a still normal level of 2 per cent and 20 per cent carried interest for venture capital funds. This matters to both the trust and the shareholders.

The Scottish Mortgage Investment Trust’s appeal to companies is equally distinctive. Most venture capitalists demand an exit as their funds near the end of their ten-year life. In turn many companies seek to go public to satisfy this need for liquidity. The Trust feels no need to encourage companies to move to an Initial Public Offering (IPO) prematurely. But if an IPO is the eventual outcome then the Trust’s preference, subject to business progress, is to buy more shares at that stage both for Scottish Mortgage and frequently for other portfolios managed by Baillie Gifford that are unable to make investments until a company is public.

This willingness to own companies regardless of their status as private for the long term, on the verge of an IPO, or as fully fledged public companies is a cornerstone of the Scottish Mortgage Investment Trust’s policy. As per the Trust, it is a damaging narrowing of the necessarily limited opportunity set of potentially great growth stocks to confine itself to public companies at a time when the necessity to be quoted is unclear and the pressures of being so all too evident.