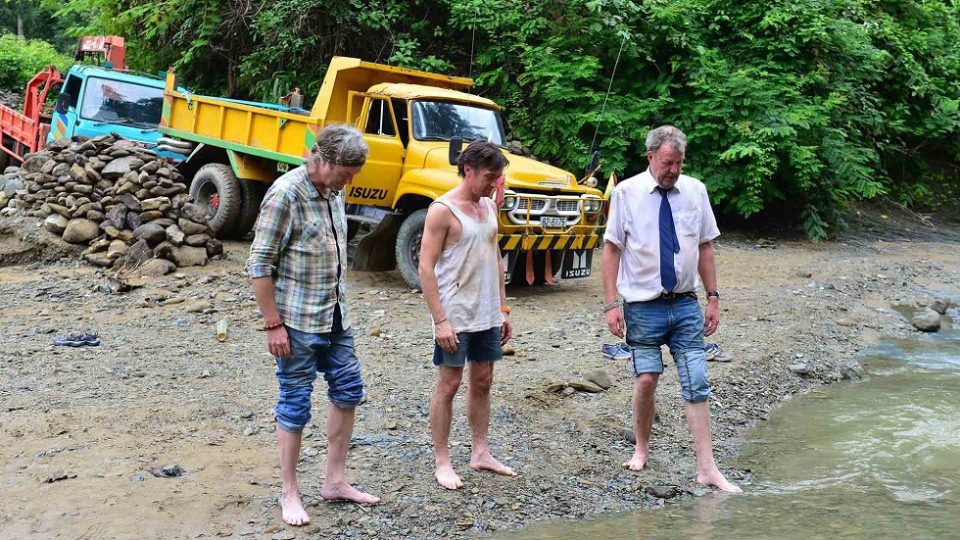 Top Gear specials are renowned for their monumentally epic journeys, incredibly memorable scenery and the amusing spectacle of three middle-aged men cocking about in unusual surroundings. What Top Gear Specials are not known for, is constructing full scale civil engineering projects which have real life applications. However, the Top Gear Burma Special brought an end to that. In this spectacular drive through the verdant countryside of south east Asia on three old and decrepit lorries, Jeremy Clarkson, Richard Hammond and James May head out to build a bridge on the river Kwai. This special was a nod to the Alec Guinness classic, Bridge On the River Kwai.  The Top Gear trio whistled (and struggled) its way through the mesmerizing terrain of Myanmar (formerly known as Burma) to find the river Kwai and build a bridge on it, just like the Allied prisoners of war did during the Second World War.

The bridge that the trio need to build during the Top Gear Burma Special was not going to be some joke bridge which would only be able to take the weight of a feather. The trio would have to drive their heavy lorries on the bridge that they built. Throughout their journey to the river, Clarkson, Hammond and May almost brought down Burma’s power supply, stumbled across the world’s least comfortable truck stop, raced around the 20 lane roads of a deserted capital, saddled up a trio of unhelpful horses in heat, and attended a completely deranged Apocalyspe Now style party in the Shan province. The Top Gear Burma Special had the trio and the rest of the Top Gear crew at its absolute best. It was highly ambitious, but definitely not rubbish.

During the two-part Top Gear Burma special, Clarkson, Hammond and May found themselves travelling out to Burma for a road trip to Thailand and the River Kwai. The mode of transportation for this perilous journey would be three old and decrepit lorries and the same lorries will need to be used for building the bridge. Jeremy Clarkson bought an Isuzu TX with an extensive stereo setup in the cab (and a comb) and a dumper truck layout in the back. James May arrived on a Hino FB110 with a crane attached to the back. Richard Hammond purchased an Isuzu TX as well, but it was modified with a lot of extra space for carrying large volume loads such as hay.

The trio started its journey in the country’s old capital of Rangoon (now known as Yangoon). The first problem that the trio encountered were Myanmar’s strange traffic laws. Even through the vehicles have their steering on the right hand side, they drive on the right side of the road. This made for some ridiculous situations such as passengers getting down towards moving traffic when disembarking from a bus. Richard Hammond’s massive lorry also faced some difficulty in getting past some low hanging wires in the city. Somehow, the trio cleared the city and headed out on a bumpy road on really uncomfortable lorries. The first part of the drive featured the trio taking the wrong road and correcting their mistake by taking a mountain pass to get back on track. Soon, they stumbled upon a truck-stop that they disliked (hated). After a long and laborious drive across Burmese countryside, the trio arrived at Burma’s new capital of Naypyidaw. They tried to check into a hotel but the hotel staff refused to accommodate them (the way they were dressed up perhaps had something to do with it). The trio grew weary of their failure in finding a good place to sleep. They decided to modify their lorries for accommodation purposes (just like they did with their cars in Africa when they went out to search for the source of the river Nile). Aside from the changes for accommodation purposes, the trio also made some other changes to their lorries. With their modified lorries ready to go, the trio used the empty streets of Naypyidaw for a drag race (how can a Top Gear Special not have a drag race?).

After cocking about on the streets of Naypyidaw, the trio headed off northwards towards the disputed Shan province. Once in Shan, the trio visited a local village anf dealt with some (actually a lot) of the problems their modifications caused. A wrong detour led to the lorries running out of fuel in a village which didn’t have any. As a result, they had to ride horses to the closest village which had fuel. That obviously didn’t end well.

In the second part of the Burma Special, the trio found out that they weren’t building a bridge on the river Kwai, but it was actually on the aptly named river Kok. The brutal 15 day task turned out to be the toughest thing the trio had ever done in their life. They waded through turd bottomed streams, got drunk on some ‘Black Cock’ and ‘Red Cock’ and found out about some oddly named fruits and vegetables in Thailand. Jeremy Clarkson also covered his lorry’s teddy bear ‘Rudyard’ in jam so that ‘it can attract all the flies’. Upon completing the bridge, James May was the first one to cross it on his lightweight van/lorry. Jeremy Clarkson went next on his ‘sports lorry’. A trepid Richard Hammond was the last one to take his 7.5 ton heavyweight lorry across the wooden bridge. Later on, during a scene which featured Clarkson and Hammond looking over their completed bridge on the Kok River, an incident landed Top Gear in some hot water. During the scene, a native of the area was crossing the bridge as Jeremy Clarkson said to Richard Hammond about their finished work – “That is a proud moment, but there’s a slope on it.” Slope is a derogatory term used to refer to people of East Asian ethnicity because of the shape of their eyes. After the second part of the Top Gear Burma Special was broadcast, a host of angry complaints of racism arose in regard to the comment. The primary complaints stated that “slope” was a derogatory term for an Asian. This led to Top Gear and Andy Wilman, the show’s executive producer, issuing unconditional apologies for any offence caused by it in late April 2014. The scene was subsequently cut from future repeat telecasts of the Top Gear Burma special. In his statement released to the media, Andy Wilman said: “When we used the word slope in the recent Top Gear Burma Special it was a light-hearted word play joke referencing both the build quality of the bridge and the local Asian man who was crossing it. We were not aware at the time, and it has subsequently been brought to our attention, that the word slope is considered by some to be offensive and although it might not be widely recognised in the UK, we appreciate that it can be considered offensive to some here and overseas, for example in Australia and the USA. If we had known that at the time we would not have broadcast the word in this context and regret any offence caused.”

However, a few months later, British broadcasting regulator Ofcom, which investigated the complaints of racism in regard to the comment, ruled that both the BBC and Top Gear had breached broadcasting rules for using offensive language, stating that the use of the term was both offensive and racist, that the explanation of its context for the broadcast could not be justified, and that the broadcaster had missed opportunities during filming and post-production to “check whether the word had the potential to offend viewers”. Following the incident, and emergence of video evidence of an unaired take during filming for Series 19, in which he was shown to mumble another racist term, the BBC chose to give Jeremy Clarkson a final warning in regard to his behaviour, amidst calls by many public figures for him to be fired.

Top Gear Burma Special: What Happened to the Bridge?

Season 21 of Top Gear was absolutely brilliant. Aside from featuring the magnificent McLaren P1 and the stunning Porsche 918, the season also featured the memorable Top Gear Burma Special. We have already discussed about it earlier in this post. However, a lot of people might still be wondering about the fate of the bridge built by the Top Gear team.

Driving three lorries, Jeremy Clarkson, Richard Hammond and James May were following the structure of the book, Bridge Over The River Kwai. Richard Hammond even tried reading it on the ‘porch’ of his giant lorry.

Just like the prisoners of war in the book, the trio eventually got to a river which they had to cross. It was no surprise that somewhere in their travels they’d gone wrong and were in fact not at the famous River Kwai, but instead the River Kok. The Kok flows from Myanmar to the East towards Mueang Chiang Rai in Thailand. Yes, the trio had somehow managed to reach the wrong river.

Despite this, they decided to go on with building the bridge.

After enduring a lot of technical difficulties, including Jeremy tipping over a crane and nearly killing James, then tipping a just woken up James out of his tent and into the river, they eventually managed to build something out of a lot of bamboos which looked like a bridge.

It worked, but there were a couple of problems. Firstly, a comment Clarkson made about the bridge became viral after he used a racial slur in a joke and caused quite a stir (as discussed above). Secondly, and sadly they were forced to bring it down afterwards despite it being strong enough for lorries cross.

A keen fan on Reddit sent a mail to the campsite in which the trio were staying throughout the filming of the Top Gear Burma Special’s bridge building part. The mail received a prompt and detailed response. This is what the response said:

Thanks for this. You are correct and they did stay with us. Indeed I found the location for them and we organized all the logistics. Unfortunately, the bridge was then taken down after the filming even though we asked for it to remain in place as it was an excellent facility for the local people. The bridge was not built over the Kok, but over the Fang River which flows into the Kok, for a number of reasons.

The Top Gear Burma Special was indeed the cutting edge of cocking about. It featured three middle aged men driving extremely uncomfortable lorries on extremely uncomfortable roads. The journey was treacherous and perilous. Richard Hammond even fell from a horse and sprained his right wrist real bad as a result. The scenery however, was breath-taking. After comparing the surroundings to the set of Game of Thrones, Jeremy Clarkson went on to call the Shan “God’s Garden”. It was a stunning drive through a stunning country. Very tough, but a lot of fun. And on that bombshell, it’s time to end the post. We will leave you with these outtakes and deleted scenes from the Top Gear Burma Special to enjoy: