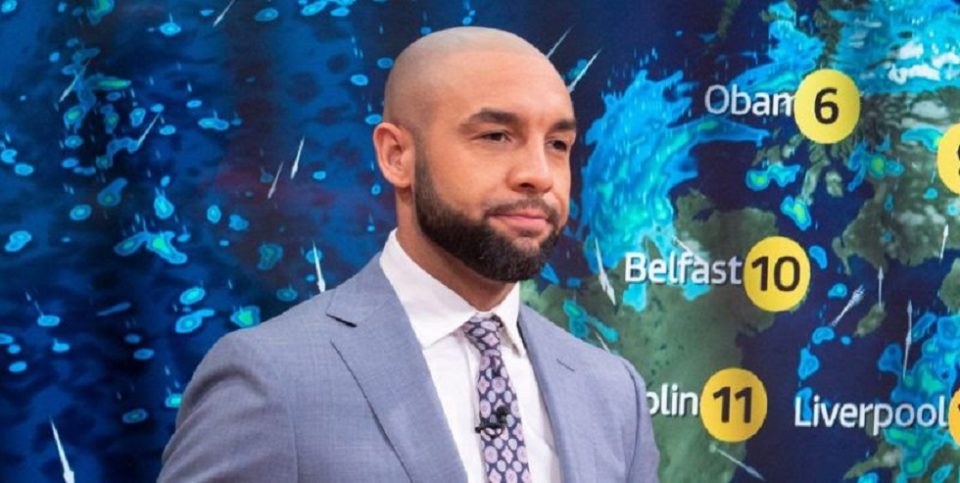 Alexander Isaac “Alex” Beresford is an English journalist who presents the weather report on ITV’s Good Morning Britain hosted by Susanna Reid and Piers Morgan. He is one of the most famous weather report presenters in recent memory. Aside from reading the national weather reports since 2007, he has also presented numerous shows related to weather. In this post, we will take a look at the life and career of Alex Beresford.

Alex Beresford: All You Need To Know

When was Alex Beresford born?

Alex Beresford was born on October 17th, 1980 in the town of Bristol, England. He is biracial. His father is a Black Britisher of Guyanese descent while his mother is a White Britisher of English descent.

Where did Alex Beresford study?

Alex Beresford started his career for the ITV News West Country on ITV West Country, based in Bristol. He started working as an autocue operative in August 2004. He was eventually signed on to be a weather presenter. He started presenting the National ITV Weather report since November 26th 2007, a position that he has retained since. Alex Beresford was slated to appear on ITV’s Breakfast show called Daybreak as the permanent weather presenter. However, he only made a guest appearance on March 16th, 2012 and quit because of personal reasons. However, he did continue to act as the weather presenter on a stand in basis for show regular Laura Tobin. Daybreak was cancelled on April 25th 2014 and replaced with Good Morning Britain. Alex Beresford continued to stand in for Laura Tobin in the new show as well. He continued to appear in studio and on external sets as well.

Beginning on 30 April 2013, Alex  Beresford presented a three-part series for Channel 4 called The World’s Weirdest Weather. The following year, he hosted four-part Channel 4 series Britain’s Most Extreme Weather which began airing on 28 April 2014. He also served as a presenter for three episodes of ITV’s Tonight programme in June 2015, January 2016 and April 2019.

As it has become very common for British celebrities, Alex Beresford also appeared on the tenth season of the hit TV series Dancing on Ice in 2018. Alex Beresford teamed up with professional skater Brianne Delcourt. On the show, he went on to become the seventh celebrity to be eliminated on the show. He exited the show after losing a skate-off against Kem Cetinay and his partner Alex Murphy.

Alex Beresford is also the organizer of a Diversity School Tour Project. As a part of the show, Alex Beresford visited a lot of inner-city schools and talked about media careers. Hazel Blears chose him for the national role model programme for young black men. He also famously donated a toy truck to the Evening Post Christmas Toy Appeal.

Who was Alex Beresford’s wife?

Alex Beresford was married to fitness expert Natalia Natkaniec for a long time but he split up from her just weeks before the start of the Covid-19 lockdown.

Why did Alex Beresford divorce his wife?

In a recent interview, Good Morning Britain‘s Alex Beresford talked about his secret and surprising split with his wife Natalia Natkaniec.

The ITV weatherman confirmed he and his wife agreed to go their separate ways two weeks before the UK went into lockdown as a result of the coronavirus pandemic.

In 2019, the couple decided to bring their relationship to an end whilst remaining under the same roof with their 10-year-old son Cruz, as per numerous reports.

Alex Beresford spoke for the first time about his split with his wife in a podcast. The 39 year old said:

“It’s been a massive learning curve, I didn’t think at the age of 20 that when I was approaching 40, I would be in this situation.

I don’t want to grow old on my own, life is for sharing and it’d be great to meet someone in the future but they have to be right for me, right for Cruz.”

Speaking about his inability to meet his son because of his wife developing coronavirus symptoms, Alex Beresford said:

“When Natalia and Cruz moved out, it was two weeks before lockdown. Natalia developed symptoms, she had a cough. It turned out not to be COVID-19, they had to self isolate for 14 days – so I went from living in a house full of people to living on my own in lockdown.

I’ve realised how strong I am, but I am only strong because of the people I have behind me,

As we kind of moved into the summer, myself and Natalia decided we were going to part ways, which, you know me – I’m not a quitter, and I hate quitting things.

We tried to work through things, but at some point you realise the best thing to do for everybody is walk away, but walking away is never easy.

We were in the same house up until the beginning of this year, knowing that we were parting ways, it takes a while to figure things out. One thing I didn’t want to do is rush things.

By being in that house, knowing we weren’t together, we started to get on better – it removed a lot of the stress and expectation that a relationship can bring.

It was so much to manage, we are only human and have feelings and emotions.

The important thing is to open up and talk to someone about what you’re going through”.

What has Alex Beresford’s wife said about the divorce?

Alex Beresford’s ex-wife Natalia Natkaniec hasn’t announced the split publicly. However, she had shared a cryptic post on Instagram which made people talk about some issues in her relationship. Here’s what her post said:  “Dear Universe, I’m open to things being easier and more magical than I could ever imagine.”