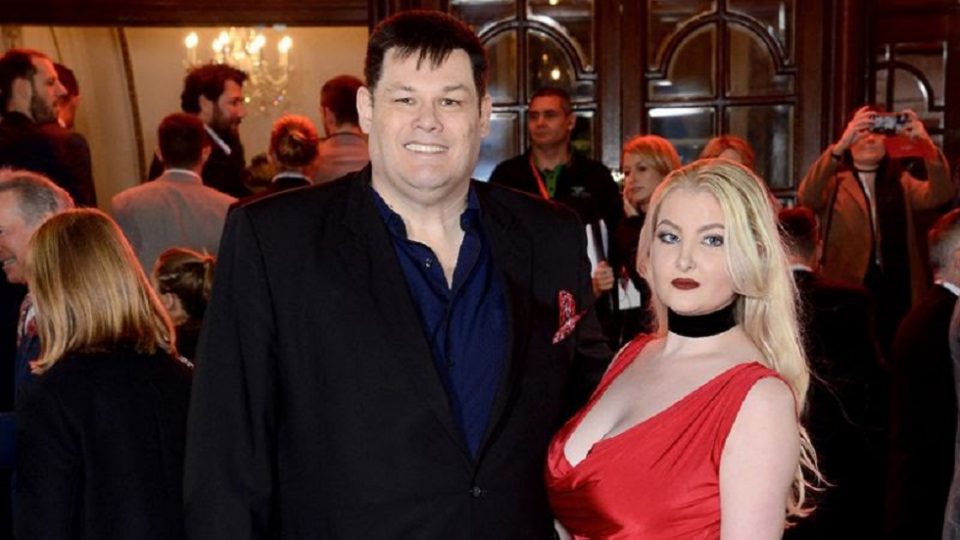 Mark Labbett is a famous British television personality who is well known for hosting many quiz shows. He is also very famous for his huge frame and has earned the nickname of “Beast”. The 54 year old TV star married his 27 year old second cousin in 2014. With such a massive age gap, it wasn’t really surprising that the younger Katie Labbett had an affair while still married to Mark Labbett. The couple had a brief split but they have since reconciled. And they are presumed to be together as of now. Let’s find out more about Katie Labbett.

Katie Labbett: Her Life and Relationship with Mark Labbett

Who are Mark Labbett and Katie Labbett? Is it true they’re cousins?

Mark stars in ITV game show The Chase as one of the Chasers. He and Katie got married six years ago and share a son together. The pair are second cousins, but both claim that they weren’t aware of this until after they got married.

When quizzed about it on Loose Women, Mark Labbett said: “It wasn’t something we were aware of at the time – it was one of those things that happened. I had been a single man for a long while so I was getting used to the idea of being on my own. Especially as a bachelor, we can get pretty selfish, you get used to doing what you want to do all of the time. As a couple of my friends pointed out the big challenge for me is learning to adapt with being with someone else.”

Katie Labbett went on to add: “We met five years ago, have been together for four and married for three.”

What were the Mark Labbett cheating claims?

After rumours of the alleged affair became public, Mark Labbett and Katie Labbett split for a brief period of time. Apparently, Katie Labbett did not explicitly disclose her marital status to Scott Bate and her friends. When one of Bate’s friends asked her about it, she became extremely defensive and angry. A lot of people became aware of her marital status after she appeared on Loose Women with Mark Labbett. People decided that it wasn’t right or fair on Mark Labbett or Scott Bate.

The report stated that Scott Bate shared a picture of himself and Katie Labbett on February 13th, a day before Valentine’s Day. Explaining the reason behind that to a friend, Bate said: “We did it a day early so it’s not as busy.”

Katie Labbett subsequently spoke out on the claims, saying: “Mark and I had been talking about separating for some time — we have been drifting for a while. He works away a lot and that’s been hard. A lot of people think it’s the age difference but we don’t see that as the factor. It’s more that we don’t have mutual friends, and our lives are just very different. I met Scott by accident, on a night out, and we just clicked. It wasn’t intentional, it just happened. But Mark always knew — straight from the off [sic], I was honest. He knew I was going out and who I was seeing. He was incredibly understanding. If it was anybody else it wouldn’t matter, but because Mark’s in the limelight people have been gossiping. It’s frustrating.”

When did Mark and Katie get back together?

In September last year, it emerged that Mark and Katie had got back together, with Mark saying that they were “working through a rough patch”.

Speaking on Loose Women, Mark said: “Like a lot of relationships, you go through a rough patch. We’re working our way through it. A newspaper offered us a sum of money and we kindly denied. We’re quite private, there’s no pictures of our son online and I’m not going to name him until he’s old enough to make the decision.”

Co-incidentally, even though Katie and Mark Labbett are second cousins, they didn’t know about it until their wedding. The couple explained the situation during their appearance on Loose Women: “It wasn’t something we were aware of at the time — it was one of those things that happened,” he said in 2017. Mark Labbett also spoke on the subject of finding love: “I had been a single man for a long while so I was getting used to the idea of being on my own. As a couple of my friends pointed out, the big challenge or me is learning to adapt to being with someone else.”

According to Katie Labbett, she met Mark Labbett through some mutual friends and started dating in a year’s time. The following year, they tied the knot at Arundel Castle in West Sussex. At the weekend, Mark Labbett’s father-in-law was forced to deny claims Katie had been cheating on the star for a year. British tabloids alleged that Katie Labbett had been dating someone else whilst being married to Mark.

According to a source: “[He] and Katie have been seeing each other since 2017.

“It took a while for people to realise who she was and that she was married.”

When asked about his opinion, the man in question shrugged it away politely. He said: “I don’t want to comment. You will have to speak to her about it.”

Katie Labbett’s father vehemently denied the cheating allegations and maintained that she was not in another relationship.

The gentle giant of a quizzer Mark Labbett is a regular on ITV’s The Chase, which he has starred on since it first aired in 2009. The contestants on The Chase play against a professional quizzer (chaser) who tries to prevent them from winning the cash prize. Mark Labbett has appeared as a chaser alongside Paul Sinha, Jenny Ryan, Shaun Wallace, Anne Hegerty and Darragh Ennis. Mark Labbett isn’t just a beast in stature, he is also a beast of a quizzer who has also appeared on Mastermind, Only Connect and Who Wants To Be A Millionaire?. Here are some of the best moments of Katie Labbett’s quizmaster husband Mark Labbett:

Snug Piercing Can Be Snug Like A Bug In Your Ear

7 Cynthia Conte Facts For Any Journalist Who’s Into Boxing