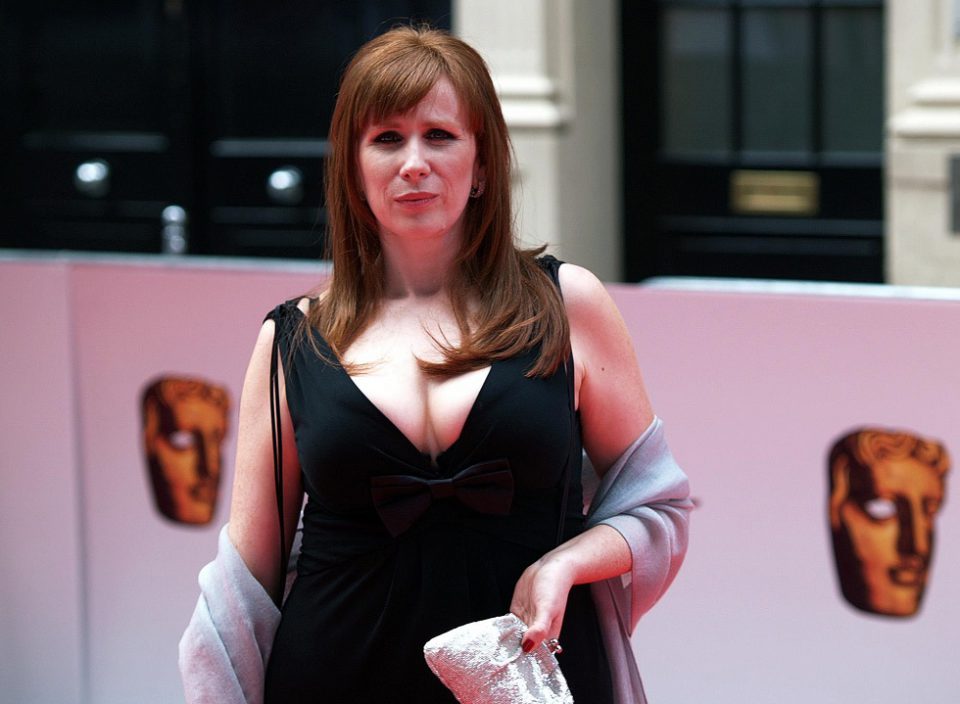 She’s the infamous “Nan”, Lauren, or maybe you know her as the Irish nurse Bernie, or Geordie Georgie, or Essex girl Sam! Whether you’ve been following The Catherine Tate Show since it began back in 2004, or just discovered the English comedic icon, there’s a bunch of interesting facts about Catherine Tate, famous for her role in The Office and Doctor Who as well.

A versatile force of nature, Tate is an actress, comedian, and writer who following the success of The Catherine Tate Show, Tate starred as Joannie Taylor in the BBC One comedy series Catherine Tate’s Nan (2009–2015). She might have also seen her as Miss Sarah Postern in the BBC One sitcom Big School (2013–2014). Or you might have heard her vocals in 2017, where played the voice role of Magica De Spell in the DuckTales animated series. In terms of movies, Tate has appeared in the films Mrs. Ratcliffe’s Revolution (2007), Gulliver’s Travels (2010), Monte Carlo(2011), SuperBob (2015), and Nan The Movie which is scheduled to be released in 2020 (currently postponed).

But she changed her surname to Tate when she joined Equity, the U.K.’s theater union.

Today, Catherine Tate is one of the biggest stars in British comedy who has won numerous awards for her work on the sketch comedy series The Catherine Tate Show as well as being nominated for an International Emmy Award and seven BAFTA Awards. Following the success of The Catherine Tate Show Tate played Donna Noble in the 2006 Christmas special of Doctor Who and later reprised her role becoming the Doctor’s companion for the fourth series in 2008.

2. Catherine Tate grew up in The Brunswick Centre, a Grade II listed residential and shopping center in Bloomsbury, central London:

It’s a distinctive modernist development that’s been used as a shooting location for various movies and TV shows including Philip K. Dick’s Electric Dreams, The Interceptor, and ’70s Jack Nicholson film The Passenger.

3. As a teenager, she acted in a National Youth Theatre production with Daniel Craig:

And later reconnected with him in a special extended sketch for the U.K. Red Nose Day. Craig’s deadpan comedy chops are pretty darn impressive.

4. She was expelled from her convent school when she revealed she wanted to act:

Catherine went to a Catholic boys’ school because the facility at her Catholic girls’ school did not have a program including acting. In fact, when she admitted to wanting to be an actress, it wasn’t received well:

“I said I wanted to be an actress, and what the nuns heard was ‘I want to be a prostitute,’” Tate recalled on a recent episode of Tennant’s podcast.

5. Growing up Catherine suffered from an obsessive-compulsive disorder; it was a word association disorder:

An example of what Catherine had to live with would be: she couldn’t leave her jumper on the floor before going to bed because it would bring bad luck to her mum; her mother’s name is Josephine and it starts with a ‘J’ like jumper.

6. In addition to OCD, Tate was “shy and awkward” during her school days, and used her sense of humor to deflect attention away from her:

“When I realized I had a facility for humor, I latched on to it, and it gave me confidence and I built my personality around it,” Tate told The Guardian in 2008. “So I subconsciously made myself become the funny one so that would be my label rather than the ginger one or the red-faced one.”

“I realised that if you get yourself labelled as the funny one, people don’t look any further. I’ve used that as I’ve got older. It’s controlling: I decide what part of my personality you’re seeing. I don’t want you to look at me, I really don’t. I don’t want you to comment on my clothes, my hair or the way I look.”

In an interview with Jonathan Ross, Catherine said that as a teenager growing up she was very reclusive and hardly spoke to anyone. She also said that each sketch she does is another face to hide behind.

She also admitted to a journalist that even the idea of being photographed as herself for a magazine was something she found terrifying. “I thought on the way here,” she said, “what if the taxi had a tiny accident, a little bump? Then I would be a witness, you see, and have to miss the photo shoot…”

She plays many characters, one of which has a world-known catchphrase, “Am I bovvered?”. “Lauren is who I was, Nan is who I shall become. I think somewhere [Lauren] walked among me,” Tate joked.

Catherine Tate played the role of Donna Noble in Doctor Who, a woman in a wedding dress who suddenly appears in the TARDIS at the end of the episode “Doomsday”. She played Donna for a one-off Christmas special, and everyone loved her so much they wanted her to come back as a proper companion, but didn’t think she’d do it. But she said yes!

Catherine Tate returned to Doctor Who in 2008 to reprise the role of Donna Noble as the Doctor’s companion throughout the fourth series, which was shown on BBC One starting on 5 April for a 13-week run.

Catherine received the Greatest Contribution in a 2008 poll with Doctor Who Magazine for her role as Donna Noble. She also scooped Best TV Actress from SFX magazine and came in at Number 3 for Sexiest Woman. 7). Her favorite Doctor Who episode is Turn Left.

9. Although she starred in Doctor Who, she says she doesn’t always understand it:

Earlier this year Tate said playfully that she hadn’t watched any of Jodie Whittaker’s Doctor Who episodes “because I won’t understand them and it makes me feel inferior.” Discussing her own stint on the show, she recalled: “I kind of just jumped into Doctor Who saying, ‘Oh, this will be an adventure.’ It was a real game-changer actually in my life, Doctor Who. I absolutely loved it. But it doesn’t make me a sci-fi aficionado! I still don’t know what goes on, and I wasn’t quite aware what was going on to me.”

Langford, who played Mel Bush, companion to Colin Baker and Sylvester McCoy’s Doctors in the ’80s, appeared as herself in a sketch with Tate’s character Derek Faye, a camp middle-aged man who doesn’t like people to presume he’s gay. Warning: some of the language is not safe for work!

11. Tate doesn’t drink alcohol because she dislikes “the loss of control.”

And she doesn’t like that quintessential English drink, a cup of tea, either!

Her most famous characters on her eponymous sketch show were Bernie the Irish nurse, the jumpy Margaret, and spoiled Aga Saga.

13. Catherine Tate is the patron for the Laura Crane Youth Cancer Trust, supporting the charity since August 2006:

In November 2005, Catherine Tate appeared in a charity sketch as part of the BBC’s annual Children in Need telethon.

In December 2008, Catherine gave a reading as part of the Woman’s Own Children of Courage Awards. The event gives Awards to children who are an inspiration to others; the ceremony was held at Westminster Abbey and was hosted by Prince Harry. 5). November 2008, Catherine painted a canvass for the charity Willow Foundation. An auction sold printed versions of the painting and all proceeds went to the charity that provides days out for people suffering from serious illnesses.

15. In January 2012, Catherine Tate returned to The Office for its eighth season:

In the seventh-season finale of The Office, which aired on 19 May 2011, Tate guest starred as Nellie Bertram, a potential replacement for the departing Michael Scott (played by Steve Carell).

In January 2012, Tate returned to The Office for its eighth season. She reprised her role as Nellie, who was hired as a “misguided special projects manager”. She returned as Nellie for the ninth and final season. Essentially, she was on till the season ended.

16. She has a daughter named Erin:

In 2011, Catherine split from her long-term partner, and started dating Take That star Jason Orange. After the birth of her daughter, Catherine suffered from postpartum depression; a condition she hid from her family.

Catherine Tate is a keen observer of people and picks up on their behaviour. But she has no interest in doing impersonations or political satire. “It’s not for me, I’m wigs and teeth,” she said.  That being said, she does an excellent portrayal of “posh” people and explains, “The greatest compliment you can get when you do characters is when people say, ‘That’s just like someone I know’.”

On 16 March 2007, Tate appeared for a second time on Comic Relief as some of her well-known characters from The Catherine Tate Show. She acted in sketches with David Tennant, Daniel Craig, Lenny Henry and the then Prime Minister Tony Blair, who used the show’s famous catchphrase, “Am I bovvered?”

19. Catherine loves animals and has cats and dogs:

She has a dog named Twinkle which John Barrowman gave her.  Catherine volunteers at Battersea Dogs Home. Did you know? Catherine helped the Bush Theatre adopt their two theatre cats, Pirate and Marley.

20. Catherine Tate has performed with the Royal Shakespeare Company, and at the National Theatre:

Catherine originally trained as an actress and joined the Royal Shakespeare Company when she left drama school, but only played a couple of very small parts. She started doing comedy as a way of creating her own work, and her comedy made her famous. This fame then led to her landing straight acting roles, and in 2011 starring in her first Shakespeare play in the West End alongside former co-star David Tennant in the Shakespeare comedy Much Ado About Nothing at London’s Wyndham’s Theatre.

21. Catherine Tate began her stand-up comedy career in 1996, and has featured in comedy series such as The Harry Hill Show, Barking, and That Peter Kay Thing:

She studied at Central School of Speech and Drama (University of London) for three years. She started performing serial dramas such as London’s Burning and The Bill and in 1996, before delving into stand-up comedy.

22. In July 2008, Catherine starred in the World Premiere of David Eldridge’s Under the Blue Sky:

10 Reasons Why You Should Use SEO to Build Your Business