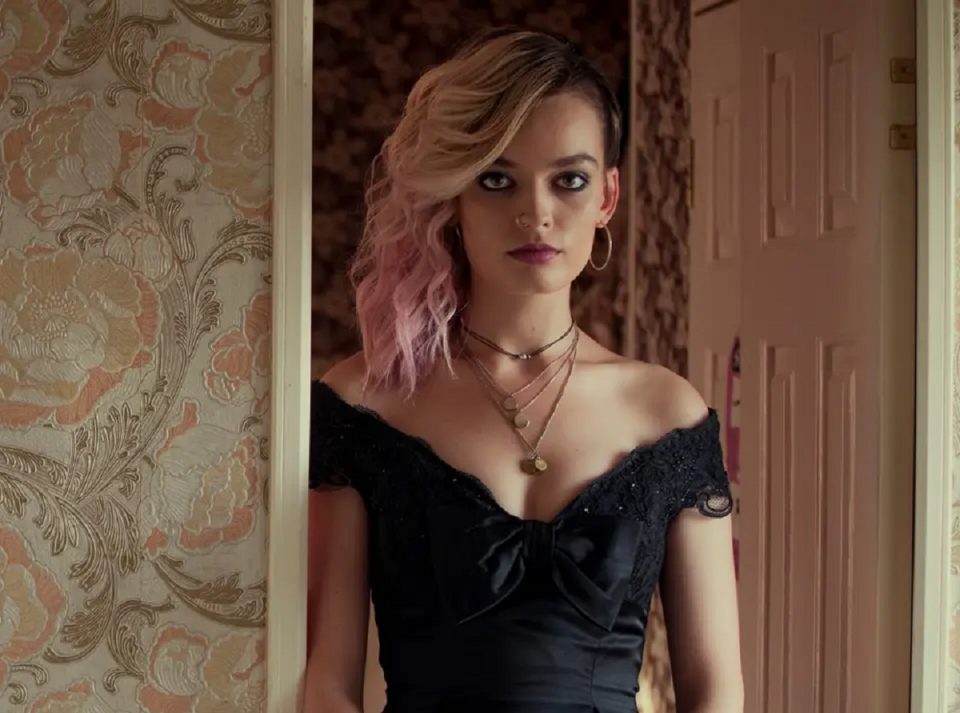 Emma Mackey is a French-British actress who gained fame through the series Sex Education. More recently, she was in the event film “Eiffel” with Romain Duris. Enjoy this opportunity to learn more about this young Franco-British actress of 25 years through our blog!

1. She was born in France, but shifted to England, causing a culture divide:

Discovered by the phenomenon series “Sex Education”, broadcast on Netflix, Emma Mackey exploded in the eyes of the general public. In the casting of the series Sex Education , which is a hit on Netflix, Emma Mackey is noticed in the role of Maeve Wiley. Eyes full of challenge, colored hair, rebellious allure, the witty teenager is out of tune. Fans then discover that the actress was born… in France, in Le Mans!

Emma Margaret Tachard-Mackey was born at Le Mans in the Sarthe to a French father and an English mother. She grew up in Sablé-sur-Sarthe with her two brothers.

After a general education with high honors obtained in Nantes, she chose to continue her studies in England and learned theater at the University of Leeds.

“I had to find my British culture”, she recently confided to a French magazine as part of the promotion of Eiffel with Romain Duris.

But Emma Mackey does not forget her French roots either, as she said:

“I still have quite a few friends from high school here. I try to come home regularly, at least for the holidays, and at Easter, for my mom’s birthday! I try to do two little tours in France each year, because it feels good too, “she explained in 2019.

The actress already said she wanted to shoot in France as well.” I want to reconnect with my French side!  Learn more about cinema – and French productions – which I don’t know very well .” The actress even said that she thought she “rejected France” for a long time:” It’s complicated to fully accept these two cultures. I thought I had to choose “.

After studying at the University of Leeds, she left for London where she continued the castings and landed her first role in the horror TV movie Badger Lane in 2016.

But it was in 2018 that her career really kicked off with her role as Maeve Wiley in the Netflix-produced Sex Education television series, where she played alongside Asa Butterfield and Gillian Anderson. Great success, the British series allows her to be revealed to the general public.

The same year, Emma Mackey landed her first film role in the movie Summit Fever, directed by Julian Gilbey and shot in Chamonix. She plays a French ski instructor and gives the answer to the American actor Freddie Thorp.

Prior to this, she joined the artist agency Curtis Brown Talent. During the summer of 2018, she appeared in Summit Fever with Freddie Thorp, playing the role of Isabelle, a ski instructor.

She also appears in productions of The Workshop Theater, the faculty’s troupe; and even directs certain productions.

3. Between acting jobs, she took up modeling:

In 2017, she modeled for AIDA Shoreditch, a British clothing line.

Emma Mackey has made several forays into fashion photography, notably when she posed for the summer collection of the London concept store AIDA Shoreditch. When the celebrity arrives, it is solicited by many women’s magazines. In February 2019, a month after the launch of Sex Education , she posed in Vogue UK dressed in Balmain and she was invited by designer Olivier Rousteing to the brand’s parade in Paris. The same month, she was in L’Officiel Paris and in Jealous, dressed in Prada. In December, she was on the cover of Glamor France and Vogue UK.

Because of the resemblance early in her career, Emma Mackey often was referred to as the Margot Robbie look alike, only she was French!

In 2020, during an interview with a magazine, she declares that she is single.

Emma Mackey cultivates a taste for extreme discretion : she is also very active on social networks and never displays her private life. We just know that the latter was in a three year relationship with the British actor Dan Whitlam … until his return to France for the shooting of Eiffel.

She previously had a relationship of over three years with British actor Daniel Whitlam.

Her career really kicked off when, that same year, she was chosen to play Maeve Wiley, in the Netflix- produced Sex Education television series , alongside Asa Butterfield and Gillian Anderson, where her performance was noticed by critics.

In April 2019, she became a member of the jury of the second Cannes International Series Festival, under the chairmanship of the Swiss director and screenwriter Baran bo Odar.

The actress also said that her future aspirations go like this: ” When I have more experience, I would like to carry a project from start to finish. Writing and directing is having control over what you want to tell. I aspire to other roles as strong as Maeve, Adrienne, or Emily Brontë, whom I embodied in an upcoming biopic of Frances O’Connor. I don’t want female satellite roles that only exist through others”.

At the moment the actress continued to have film projects lined up.

7. This is why she was cast in Eiffel:

In May 2019, it is announced that she will give the answer to Romain Duris in Eiffel, a feature film which traces the history of Gustave Eiffel in his conception of the Tower which bears his name for the Universal Exhibition of Paris of 1889.

Director Martin Bourboulon explains that “the choice to hire Mackey was obvious” and that her “strong personality is reflected in the way he plays. She is both a romantic and rock actress, with dazzling talent”.

It seems that from now on the pretty actress has decided to exploit her talent on both sides of the world and it is not her thousands of fans who will complain!

In October, we learned that she is engaged in the detective film Death on the Nile, a new adaptation of the novel by Agatha Christie directed by Kenneth Branagh, scheduled for screens in 2022.

9. Her happiness to act back in France for Eiffel, is clear:

Emma Mackey is just 25 years old and we had no doubts about her range as an actress, where she enriches the cinema with a free, strong, independent character. In Eiffel, broadcast in theaters from October 13, she breathes the necessary modernity into Adrienne, a romantic and avant-garde woman who would have inspired the famous engineer to create his legendary tower.

Coming back to France, when Eiffel arrived on her movie goals, she said she especially vibrated for this story, for this impossible love, and for her character, which we see growing and evolving.

The actress who was born and raised in France also found a film of this magnitude, the spotlight dizzying: she had to live up to the ambition of the project and what it implies, which is no easy task. Emma says that while expressing herself through a character doesn’t scare her, speaking on her behalf isn’t that easy.

With a movie like this, and Sex Education on Netflix, you’d think she was born to be in the spotlight but as a child, she was discreet at school. But at home she did the show for the family, especially the English side, who loved the arts. They read in English, they  listened to the BBC, her mother and grandparents did amateur theater.

The French-English actress who shifted to England says she loved Emma Thompson , to whom she believes she owes my first name, and from France where she lived, she looked at England as a paradise, through a pink filter.

As the actress moved there to study literature at Leeds University, she interacted with people who were targeting the conservatory acting field and followed them to London.

It was her teacher who then recommended her to the agent, who signed me up for castings for Sex Education in just six months!

Who is Jeffrey Donaldson: The New DUP Leader?