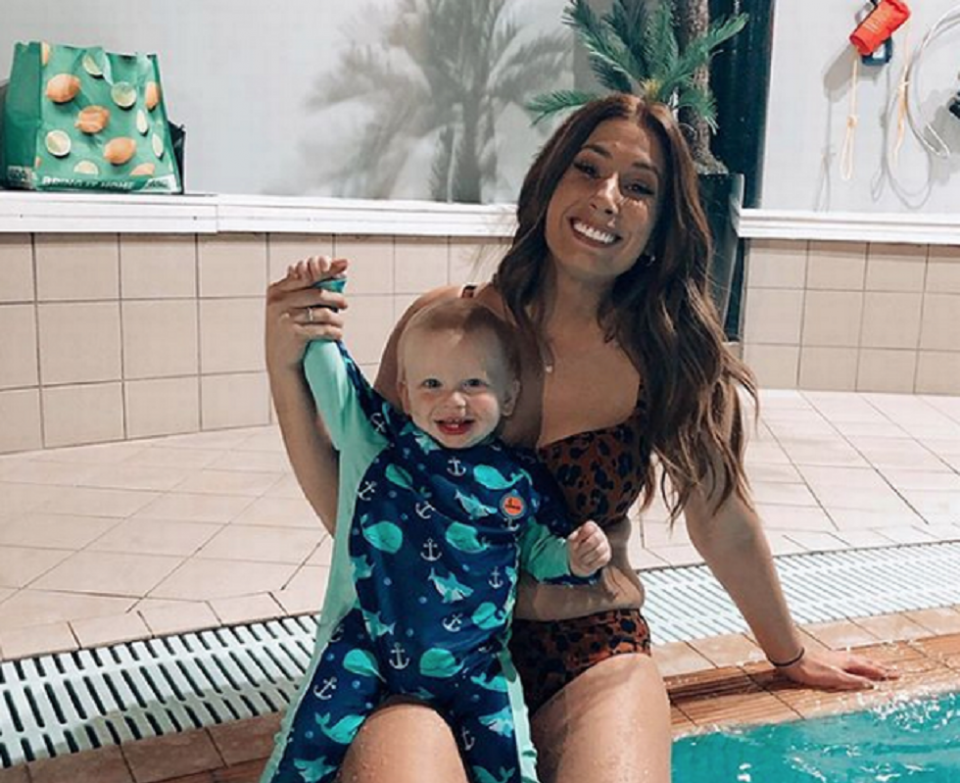 Stacey Solomon is best known for her role on Loose Women and has become a hugely popular personality over the years. She first rose to fame on The X Factor in 2009 where she finished in third place. She later appeared in numerous reality television series, winning the tenth series of I’m a Celebrity… Get Me Out of Here. She also has a podcast and collection of books to her name.

As of June 2020, Stacey Solomon and boyfriend Joe Swash have joined the Celebrity Gogglebox cast:

Celebrity Gogglebox is back on our screens on Channel 4 and Stacey Solomon was one of the first celebrities to sign up for the new series with boyfriend Joe Swash. Joining the popular TV series, we’ll be getting to know even more about Stacey and partner Joe as they get ready to share all their verdicts on the latest TV shows.

Stacey’s first job was as a barmaid and in a chippy:

Before she auditioned for the X Factor, Stacey attended musical theatre classes at college and worked as a barmaid at a country club.

She even took to Instagram to reveal she had a job at a Fish and Chip shop called, Oh My Cod! When she was a teenager. Right up to her first X Factor audition, she was still working shifts behind the bar at The Country Club near her home. She has already laughed off the prospect of failure, saying: ‘There’s always Asda.

How old is Stacey Solomon?

Where is Stacey Solomon from?

She’s originally from Dagenham and currently lives in Essex with Joe and her three children.

Her birth place is in Dagenham in England. She holds English nationality. She was born to a father, David Solomon, and a mother, Fiona Solomon. She has British, Iraqi, and Polish ancestry on her father’s side. Her father is Jewish and her mother was born into a Church of England family. Her mother converted to Judaism before marrying her father. She was only nine when her parents divorced. Stacey’s current religion is Judaism.

About her background, Stacery said: “My family practised our faith in a relaxed manner. My mum Fiona was brought up a Christian; her dad was a vicar. But she fell in love with my dad David and converted to Judaism to be with him.

“Growing up, the influence Judaism had on me was an overwhelming understanding to love those around you, care for others as if they are part of your family and strive to be the best individual you can be.

“For the majority of my life, my experiences have been positive. I went to a Christian primary school where I felt included and no different to my peers.” The Christian school she’s talking about is King Solomon High School.

Stacey Solomon and Joe Swash have a blended family:

Blending two families together is not always the easiest thing to do. London-born Joe Swash, 38, refers to it as a “long process” with its “ups and downs”, but says “it’s well worth it in the end”.

“At the end of the day, it’s for the kids,” continues Swash. “It’s not for us – we’re adults, we’ve had our parents, we’ve had our childhood. It’s our job now to give them the best childhood they could possibly imagine.”

Singer and presenter Stacey Solomon is unmarried, but not single. She is in a relationship with Joe Swash, who is a fellow presenter and actor Joe Swash. The couple started dating in 2015. Together they have four boys between them, all living together.

Stacey Solomon and Joe Swash have been together since 2016, and even with the parental struggles of coordinating everyone’s different schedules, combined with parenting in a pandemic, Swash says: “We wouldn’t change it for the world – we might even add to it in a few years’ time. We love having a house full of kids and the thing is, when we get old, they’ve got to look after us – so we’re winning!

What is Stacey Solomon famous for?

How tall is Stacey Solomon?

Stacey entered the X Factor to give her sons a better life:

It’s hard to believe Stacey Solomon began her career by auditioning for Simon Cowell on the X Factor 10 years ago! The Essex girl impressed the judges with her rendition of There You’ll Be by Faith Hill.

‘My audition was for Zach. I would love to win this for him. It would mean everything. I’d be able to get him into a good school and get him all the things he needs.’

Back then she was one of many young single mothers in Britain (she was just 20) who thought that the only way out is if someone waves a magic wand. In Solomon’s case, it was all up to the X Factor gods, and oh did they listen!

Stacey shocked viewers when she won the whopping cash prize on The Chase, after answering some tough questions on the celebrity edition of the show. This money has definitely contributed to the lavish house she and her family stay in, featured a lot on Instagram.

Stacey did a voice-over for The SpongeBob SquarePants Movie:

Her sons Zachary and Leighton were huge fans of the cartoon and the TV presenter said she made them proud when she voiced one of the animated seagulls in the Spongebob movie back in 2015.