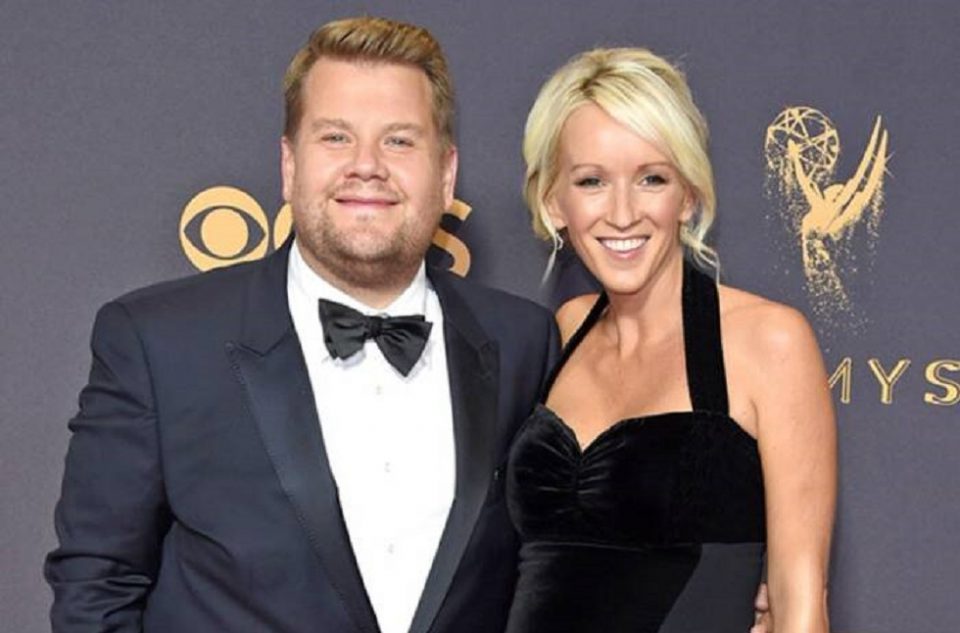 When he’s not singing his lungs out with celebrities on Carpool Karaoke, or hosting his show and occasionally eating things that could puke his guts out, James Corden is likely to be at home with his wife, Julia Carey, and their three kids — Max, 9, Carey, 5, and Charlotte, 2. James Corden has admitted to falling head over heels in love with his wife Julia Carey since the day he met her and often gushes about how incredibly supportive ‘Jules’ is when it comes to his career and children. But what else do we know about the woman who stole his heart before the fame? How did he propose? And how many houses do they have? Let’s take a look at some interesting facts about James’s wife.

It was James Corden’s History Boys co-star Dominic Cooper who played matchmaker and introduced him to his now wife Julia after knowing them both separately for years.

The duo’s mutual friend and actor Dominic Cooper, James’s good friend, was invited to a charity organization’s events and convinced James to join him for a night out.

But The Late Late Show host explained his chance meeting with the love of his life almost never happened after he revealed: “I said, ‘I’m really enjoying this sort of thing—like, cooking dinner, falling asleep, not really drinking,’” he told Dominic, who was trying to convince him to join him on a night out. “And he said, ‘Come on, let’s go, it’ll be fun.’ Thank God he persuaded me.”

It looks as though the British star charmed Julia with the very first sentence he ever said to her, which was: “I said, ‘Hi, Jules. You might be the most beautiful woman in the world.’ She said, ‘Well, thank you very much. That sounds like something you say a lot.’ And I said, ‘I’ve never said it before in my life.’ That was it. That was it, really. I was in. And by an absolute miracle, so was she.”

Within an hour and a half, James and Julia were off in a corner “jokingly” planning their next dates. They especially bonded over their love of quiet, uneventful nights which they wanted for the rest of their lives together.

The two began dating after that, and the rest is history.

3. Julia Carey said yes after Corden proposed over Christmas in 2010.

According to reports, James proposed to Julia in 2010 over the Christmas holidays, just one year after the duo began dating.

She was already pregnant with their first child when he popped the question, sources claim.

The loved-up pair were engaged for two years before tying the knot at a countryside ceremony at Babington House in September 2012.

The wedding had quite the impressive guest list: Model Lara Stone, comedian Michael McIntyre, and Snow Patrol lead singer Gary Lightbody were all in attendance.

4. She shares three kids with Corden. And their matchmaker was named Godfather.

James and Julia have three children together – Max, born in March 2011, Carey, born in October 2014, and Charlotte, born in December 2017. And they all live in Los Angeles.

The family stays together in a sprawling £7.5 million mansion in Brentwood, LA although Corden still maintains a home in Belsize Park, London.

Amidst the pandemic, the family of five lives in Los Angeles, where James continues to host The Late, Late Show. Due to the coronavirus pandemic, James, like many parents, has recently added homeschool teacher to his résumé.

“It’s hard to know who’s being homeschooled — whether it’s me or my son,” he joked during a recent virtual guest appearance. “I find myself going, ‘Wow, I did not know that.'”

The host also confessed: “I find myself — and this is deeply irresponsible — going, ‘You know what, Max? Honestly, you’re not gonna need any of this in life.'”

James once told People that fatherhood is actually “an amazing thing” and he “wouldn’t have it any other way” in his life.

5. James paid tribute to Julia Carey during his award.

James, who has always been vocal about how he values their relationship, paid tribute to his wife when he won a Tony award for his starring role in One Man, Two Guv’nors back in 2012, telling the audience:

“My girlfriend Julia gave birth to our son five days before we started rehearsals…She’s my baby mama and I can’t wait to marry her. Seriously, I would not be holding this if it wasn’t for her. She made me say ‘us’ instead of ‘I’ and ‘we’ instead of ‘me’ and I love her. Thank you very much.”