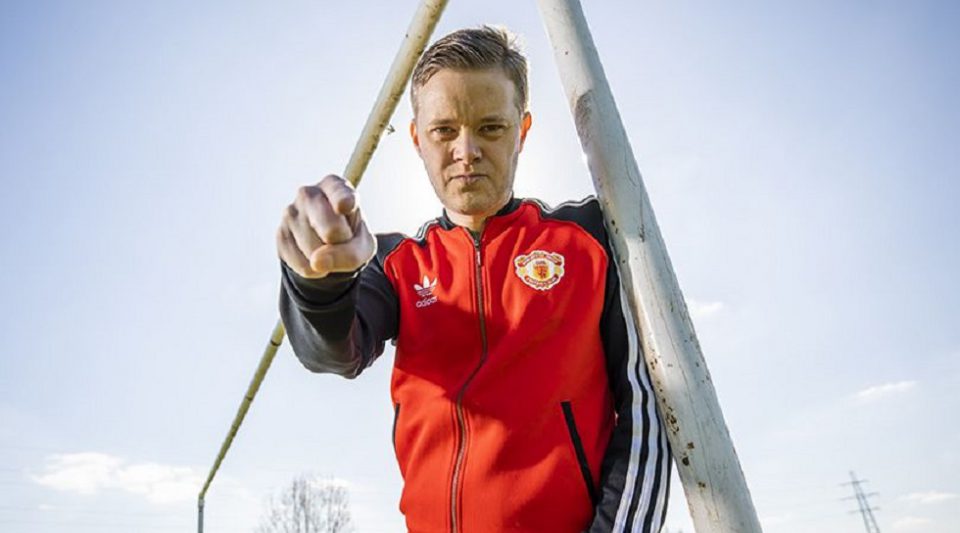 YouTube star Mark Goldbridge is best known for his Manchester United-centric YouTube page. He has amassed over 9 million views to his YouTube Channel and is known for his appearance in the Youtube channel called The United Stand which is owned by himself. The YouTube Star presents everything related to the English giant, Manchester United Football Club. Furthermore, Mark Goldbridge has been known for his ranting videos when he is not satisfied with the game and events occurring with the Manchester United Football Club as he seems to be one of the greatest fans of the club. Also, Mark Goldbridge can be seen playing the Electronic Arts’ video game, FIFA which is a high definition football game and rants there too. If you are here to know more about him then keep scrolling down!

He first joined YouTube in December 2017. 41-year-old Mark Goldbridge was born Brent Di Cesare, on April 7, 1979. There’s not much known about him about his personal life and he’s reportedly married. YouTube star Mark Goldbridge and his wife welcomed their third child in 2017.

The YouTube celeb told True Geordie on “The Kick Off” that he was a police officer before becoming a YouTuber. He couldn’t use his real name on YouTube while still at his previous job, so he adopted the online persona, “Mark Goldbridge.”

Goldbridge remembers the beginnings of the channel:

“It started in 2014 at the World Cup,” he says. “England had just been knocked out and I went on holiday to Majorca. I was lying on a lilo in the pool and just thought that I’d spent a lot of time on forums straight after a game, venting out and then waiting for people to reply.

“I thought YouTube probably wasn’t a bad idea, to put a video up to say how you feel and get people to comment below. Initially, I started it off as a more generic thing, just talking about weekly Premier League predictions. Then I did a couple of Man United reactions and they were getting more interaction than the generic thing.”

He has appeared on The United Stand and on That’s Football. His video “GAME OF THRONES ENDING RANT!” has over 45K views.

He was born Brent Di Cesare and he’s from Nottingham in the UK.  YouTube star Mark Goldbridge’s parents separated when he was six years old.

“I’m a different person when I’m playing FIFA or when I’m playing or watching football,” he claims. “I become very passionate and very engrossed in it. I don’t really swear much away from that, but it’s my release.

The YouTuber began his first YouTube channel, The United Stand, in 2014. The 41-year-old does live watch-along while venting and ranting about everything Manchester United, and he’s garnered over 394,000 subscribers.

This polarizing personality rants about everything going in the Red Devil universe—even going to other clubs before Man U plays against them just to scream about the opponent. Some of the YouTuber’s videos have turned him into meme-greatness as you’ll see below!

The YouTuber’s evolved to providing sports commentary on platforms besides YouTube. Mark Goldbridge was a sports commentator on 4rtun and is currently a contributor of Man U-related news at Paddy Power News.

Some Think He’s Not a Real United Fan

Mark Goldbridge’s obsession with Manchester United borders on excessive and sometimes seems like an act. And often, his loyalty to Man U has been brought into question.

The YouTuber Star has made no secret that he grew up in Nottingham, in a football-loving household. Mark Goldbridge’s mother is a United fan and his father, a Chelsea fan. But it was his football-crazed grandfather who converted him to a Manchester United fan, and he has been one ever since.

Mark Goldbridge mentioned his Nottingham Forest FC connection in an old video, which has since been misinterpreted to claim that he’s a Forest fan. However, Goldbridge says that it isn’t the whole picture.

“People call me a Forest fan because I’m from Nottingham,” says Goldbridge. “But my mum and dad separated when I was about six. My dad’s a Chelsea fan and my mum’s a United fan.

“But we lived in Nottingham so my dad used to take me to watch Forest games on a weekend. There was this guy about three seats down from us and he would stand up and go, ‘Nigel Clough! Lay down and die!’ My dad would turn round and tell me, ‘Look, this is his moment. All week he’s working somewhere. He’s probably got a wife who’s always nagging him, and this is his moment to release.’”

In a blog post, Mark Goldbridge says that the accusations that he’s not a real Man U fan are an attempt to discredit and shut down The United Stand. In the same post, Mark Goldbridge writes that while he supported Forest when it was up against United’s rivals, he isn’t exactly a fan like he’s of Man U.

However, the Youtuber has constantly been accused by the Red Devils’ fan community of not being a real fan. It came up again when he infamously feuded with Arsenal Fan TV’s Liam Mark “Mr DT” Goodenough in 2018.

The details are unclear, owing to both sides giving different versions of the events. Nonetheless, many football fans reacted to the bizarre feud.

A thread in the Red Devils subreddit claims that the Youtuber  isn’t a real Man U fan like DT is an Arsenal fan. Many continue to say the Youtuber’s really a closeted Forest supporter and peddles baseless rumors about the Manchester United club to boost his YouTube views.

He’s A Source of Memes:

Whether it’s his absurd rants, bizarre humor, Alan Partridge mannerisms, or feuds with the likes of Adam McKola that don’t make any sense, this Youtuber is the greatest gift from the meme gods. Some of Mark Goldbridge’s antics have left the Internet in stitches in a way only Goldbridge can pull off.

Does Goldbridge hope for some kind of relationship with the club in return for promoting it by becoming a meme to a global audience on a daily basis?

“I don’t think they really grasp that yet,” he says. “They see a video where you slate Phil Jones and my perception is that they take that quite personally. But I don’t know why you would.

“It’s like someone slating me on Twitter, I don’t take it personally. The only reason I slate a bad performance is because I care about the club. It’s passion for that club. We get so many comments saying, ‘I was a Manchester United fan but The United Stand has made me far more engaged because there’s something there every single day, a community that I can be part of instead of waiting for the weekend.’ So you’ve got a more engaged fanbase, which can only be for the benefit of the club.”

Thankfully, His Rage Has Remained On Screen Not Actual Physical Violence

“I can understand why people don’t like my opinions and want to have a go at me,” he admits. “However, I don’t think I’m the sort of person that people would want to come up to and punch in the face or shower with abuse. Most of what I do, I’m passionate about, but there is a fun banter element to it as well.”

For Any Kind of Advice to Aspiring Tubers, He Says

“The most important thing is to be consistent with who you are. Don’t sell your values on it. I’ve never liked Marouane Fellaini. I remember doing a video about him and it got about 700 dislikes and about 10 likes. I was thinking that’s not a popular opinion, but it’s my opinion and you must be consistent.

“Don’t do content you think is going to get views, just be who you are. A lot of it is down to luck as well. If people take to your voice and the way you do things, you’ve got a pretty good chance. I’m grateful that I came into it later in life because I’m in my 40s now. I did things before that have stood me in good stead. I’ve never been motivated from a financial or fame angle because I’ve achieved everything I want in my life, personally. I’m married, have kids, a house, and done all the professional jobs I wanted to do. This just started off as a hobby and fortunately it’s growing into a job that I would have dreamed of in my teens.

“To talk about football every day is fantastic, so I’m living the dream in that sense, anyway.”