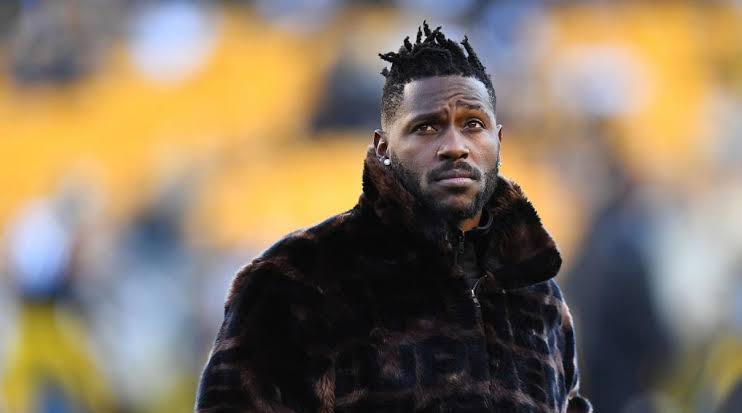 One of the most drama filled months in Oakland Raiders franchise history (and that’s saying something about a franchise like the Oakland Raiders) has finally come to an end. All-Pro wide receiver Antonio Brown, who the Raiders acquired via trade from the Pittsburgh Steelers has been released by the team. The Raiders had signed Brown to a $30 million guaranteed contract. However, over $29 million of that contract has been voided because of Brown’s actions. He flew to training camp in a hot air balloon, cold-burned his foot in a cryogenic chamber, refused to show up for some practice sessions and got into a non-physical altercation with his General Manager.

Antonio Brown’s behaviour with the Raiders was widely criticized by most NFL analysts. Newly appointed Raiders GM Mike Mayock slapped a $54,000 fine on Brown for missing practice. Brown showed his intense displeasure at that action by posting a picture of the official Raiders document mentioning the fine.

Antonio Brown posts his displeasure with fines from #Raiders pic.twitter.com/0OMhdwFu7K

Once the post was published by Brown, GM Mayock was very upset at him and that led to a non-physical altercation between the two which was even witnessed by some other players. Brown apologized for his behaviour later and was slated to appear in the Raiders’ season opener against the Denver Broncos. Raiders coach Jon Gruden had released this statement less than 24 hours ago: “Antonio is back today … We’re really excited about that. We’re ready to move on. He’s obviously had a lot of time to think about things. We’re happy to have him back, and I know Raider nation is excited about that too.”

However, once the news of Brown’s imminent release started circulating the NFL air, Gruden’s statement changed drastically. He said: “I’m emotional about it, hope you understand why. I think a lot of this guy, I think Antonio is a great receiver, and I think deep down, I think he’s a really good guy. So I’m frustrated. I’m not going to say any more about it. Hope it all works out. But I don’t have anything official to say about anything else until I get all the facts, and that’s what I’m going to do.”

Prior to his release, Brown posted this on his Instagram page:

And that’s fine ! I have worked my whole life to prove that the system is blind to see talent like mines.Now that everyone sees it, they want me to conform to that same system that has failed me all those years. “I’m not mad at anyone. I’m just asking for the freedom to prove them all wrong.” Release me @raiders #NOMore #theyputblindersonahorseforareason #NoMoreFake

The caption read: “I have worked my whole life to prove that the system is blind to see talent like mines. Now that everyone sees it, they want me to conform to that same system that has failed me all those years…Release me.”

The Raiders released him soon after that and his agent Drew Rosenhaus said in a statement to CNN: “Now that Antonio is a free agent, we are focused on the future and I will immediately work on signing him to a new team. Antonio is looking forward to a new beginning.”

Brown will be entering his 10th NFL season, his first as a free agent. Despite his behavioural shortcomings, he’d be a massive steal for any team which signs him to a non-guaranteed contract in the ball-park of $3-$5 million per year.