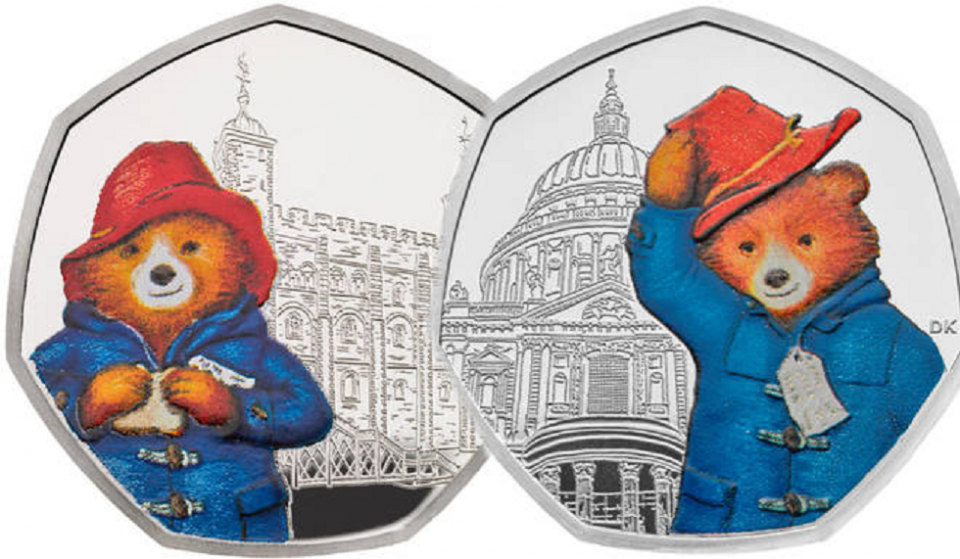 How can I get a Paddington Bear 50p coin?

There are two new coins entering circulation. One depicts Paddington clutching a marmalade sandwich in front of the Tower of London. The other coin features Paddington tipping his hat in front of St Paul’s Cathedral. These awesome new designs come on the heels of 2018’s Paddington 50p pieces. Those coins had Paddington outside Buckingham Palace and outside the train station that gave him his name. In case you want to get your hands on these new coins, you can hope for them to turn up in your loose change. The first few have already entered circulation in the tills of The Royal Mint Experience in South Wales. A lot of Paddington coins can be purchased from The Royal Mint as well. You can get the “brilliant uncirculated” Paddington Bear coins for £10, silver proof for £65 and gold proof for £850. There are a total of 25,000 silver coins available while only 600 in gold.

How much are the new Paddington Bear 50p coins worth?

The new coins in general circulation are worth 50p. If you happen to get one in your change, there is no guarantee that you will be able to fetch more than 50p for it at a later time. There are, however, certain circulated 50p coins that collectors do pay larger sums for. Usually, these are coins that were circulated in lower numbers. Such rare coins are referred to be of “low mintage”. The Kew Gardens 50p, for example, has a 210,000 mintage, making it the rarest coin in circulation. It has been sold on eBay for more than £100. The Royal Mint doesn’t usually release circulation figures for new coins until long after they have been introduced. The new Paddington coins are no exception. As a result, we don’t know exactly how rare, or common, the coins will actually be – so there’s no way to predict how much they’ll be worth.

How do the new Paddington Bear 50p coins compare to the old ones?

As we already discussed above, The Royal Mint doesn’t disclose circulation figures until a significant time has passed after the coin’s release. So it’s pointless to compare it with other rare coins. However, it is quite pragmatic to compare it with the Paddington Bear coins released in 2018. As per the available data, in August 2019, circulated versions of Paddington Bear coins fetched sums ranging from 55p to £1.45 at eBay auction. The Royal Mint is still selling the silver proof of ‘Paddington at the Station 2018’ for £60, which is the same price they were when they came out. Nine months after its release, a second hand silver proof could only fetch £31 on eBay. Similarly, a silver proof of the ‘Paddington at the Palace’ coin – originally £60 – managed to only sell for £36.35 in August. As you can clearly see, neither of the two managed to sell at a higher price than their original cost set by The Royal Mint. In fact, they lost almost half their value. However, you must remember that the price fluctuations based on those sales aren’t definitive and a sudden increase in interest for Paddington bear coins can push their price up. However, don’t expect to pick up a Paddington Bear 50p coin and expect to sell it for more than twice or thrice its cost on eBay immediately.