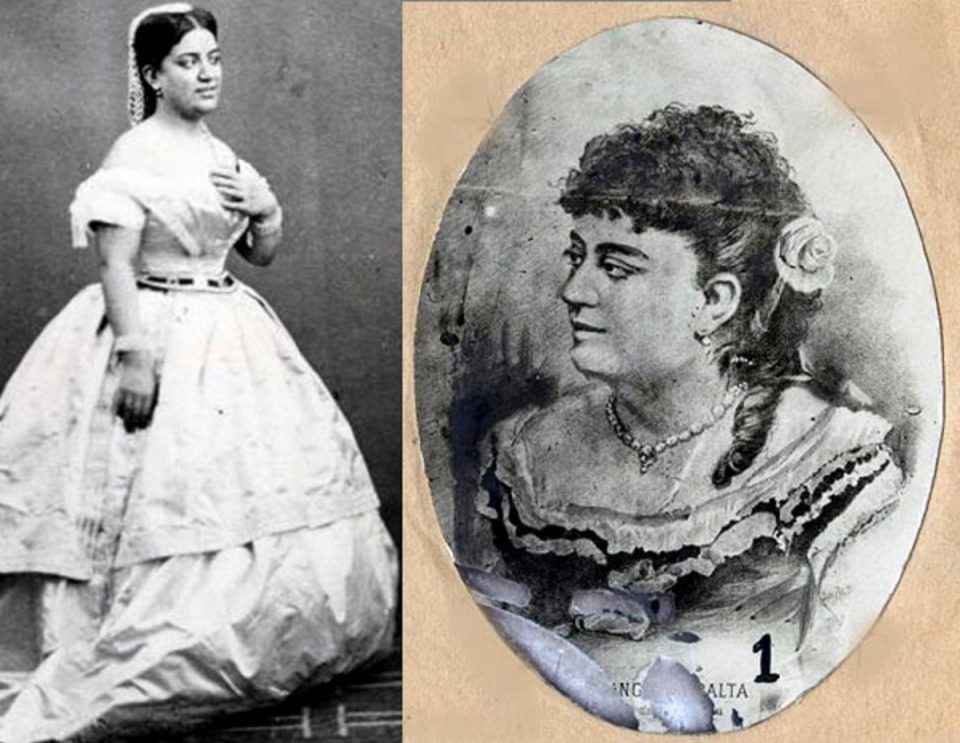 July 2021 marked the 175th birthday of Ángela Peralta Castera, a Mexican artist who is considered one of the best opera singers in Mexico. By the nineteenth century, the voice and talent of Ángela Peralta were well known in various countries of the world. She lived a very short, but also very intense life as she began with a quality of precociousness with which she toured abroad, made three European tours, and contract marriages twice in just 38 years of life. Despite her humble condition and indigenous ancestry, she knew to override the prejudices of an exclusive activity of the upper classes, take advantage of her talent, opening the doors for many women who followed her career. Thanks to the expressive caliber of her voice at the age of 16, she made her debut at La Scala in Milan and triumphed to the point of having to go out to say hello 32 times. Below, we discuss even lesser-known facts about the only and only Angela Peralta.

Angela Peralta: 9 Facts On The 19th Century Opera Singer Who Came From Nothing!

The Mexican sopranos full name is María de los Ángeles Manuela Tranquilina Cirila Efrena Peralta. Ángela Peralta’s history says she was born of indigenous descent and coming from a very humble family, she worked since she was a child as a servant to help the family economy.

The first samples of art at the age of eight were witnessed when she appeared in public performing a Donizetti song and thus she made her opera debut at the age of 15 playing the character of Leonore in Verdi’s Il Trovatore, at the National Theater in Mexico City.

She began performing the Italian opera ‘Belisario’, thus beginning to forge her career. But most people don’t know that when she was 15 years old, she finished her studies at the National Conservatory of Music, according to the Mexican government.

2. Her debut after finishing her studies:

The true debut of the young woman was at the age of 15, when she appeared at the Grand National Theater one of the main opera houses of the nineteenth century in Mexico playing Leonora from “El Trovador de Verdi” and the fame that would accompany her until the day of her death began to take root.

3. At the age of 16, she undertook her first trip to Europe accompanied by her father:

Where did she go? Italy! This was to debut at La Scala in Milan on May 13, 1862, with the title role in Donizetti’s Lucia di Lammermoor. The Mexican nightingale also took up the role of Amina in Vincenzo Bellini’s La Sonnambula, performing before King Victor Emmanuel II at the Teatro Regio in Turin. For three years she stayed on tour, singing in Naples, Rome, Florence, Madrid, Lisbon, and Barcelona, in addition to Russia and even far away towards Egypt.

While in Italy they called her “Angelica di voce e di nome” (Angelica by voice and by name) even though she was known by her followers as The Mexican Nightingale. Ángela Peralta became the first Mexican to perform at the famous Teatro de La Scala in Milan. Such was the international fame of Peralta!

4. Singing for the Mexican Emperor Maximiliano:

Angela Peralta then accepted an invitation to sing before Emperor Maximiliano, who, after listening to her, was so amazed that he named her Chamber Singer of the Empire. Taking advantage of this recognition, the 19th century Mexican soprano  made a tour of the country with presentations in Guanajuato, León and San Francisco del Rincón, even going so far as to inaugurate the Juan Ruiz de Alarcón Theater -now Degollado Theater- in Guadalajara.

For 20 years Peralta was an iconic singer who conquered the main European stages, becoming the first Mexican to perform at the famous La Scala Theater in Milan but she wanted to come back to Mexico.  She also returned to Mexico in 1871 with a performance at the Gran Teatro Nacional.

The 19th century Mexican soprano performed before kings, Pope Pius IX and in dozens of countries where she was highly applauded.

This singer also appeared before the kings Victor Manuel II, his wife and even before Pope Pius IX himself, who, they say, told him: “This is how it is sung in paradise, I can now die in peace because I already knew how angels sing in the lintels of glory ”.

Her prominence was such that by 1871 Maximiliano de Habsburgo and Carlota, who ruled what is now Mexico, ordered a grand ball for her return to the capital where she was born in order to hear her sing. However, the singer had a short-lived stay in the country, as she soon returned to Europe. It was not until 1877 that he definitively returned to the national territory to present Giuseppe Verdi’s Aída, a resounding success that was staged at the National Theater.

On May 13, 1862, the soprano made history with her incredible performance at the Teatro de la Scala in Milan, where she performed “Lucia di Lammermoor”. By the end, she had to go on stage 32 times to thank her moved attendees.

Ángela Peralta has also performed in Aguascalientes, Querétaro, San Luis Potosí, Celaya, Zacatecas, Guanajuato, and Morelia, at the Progreso Theater in Monterrey, in Saltillo, Durango and in La Paz.

In addition to her gigantic voice, Angela Peralta knew how to play the harp and compose pieces. In fact, she is the author of the gallop “México”, the dance “A memory of my country”, the fantasy Nostalgia, the waltzes “Adiós a México”, “Né m’oublie pas y Absence”; the fantasy “Thinking of you”, the romance “Margarita, el chotis Retour” and the melodies “Sara” and “Far from you”

9. ‘Quetzalcoatl’, the first Spanish-Mexican opera was formed by her:

In 1867, at the young age of 21, she traveled again to Europe prior to the fall of the Mexican empire. She made a stopover in Havana, New York, and Spain. In the capital of Spain, she married her first cousin and writer Eugenio Castera, something frowned upon by society at the time and which contributed to her professional decline and having to dedicate himself to composing small pieces.

In May 1871, Ángela Peralta returned to her hometown of Mexico City where she premiered the opera Guatemotzin, by Aniceto Ortega de Villar, at the National Theater of Mexico. That year she also became a businesswoman by forming her own operatic company.

In 1872 she made a third tour of Europe. She began her presentations again in Italy and lasted for five years. In between this time, her husband was getting sick and his illness in 1876 forced her to end her tour in Paris and to admit him to a hospital.

Ángela Peralta’s husband died a few months later and she would go on to mourn him after which she went back to Mexico in 1877, dedicating herself to promoting opera in the country. She played Aida, by Verdi, at the National Theater, organized the premiere of Requiem, by the same Italian author, and the opera Gino Corsini, by Melesio Morales.

Harry Styles Drops his Beauty Line! Here’s All you Need to Know