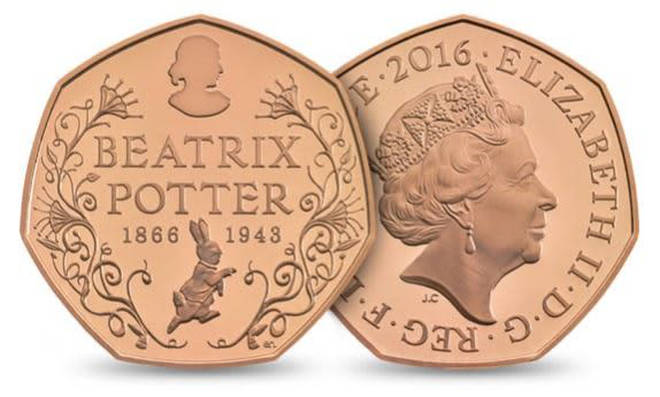 Beatrix Potter is one of Britain’s most beloved and celebrated writers and illustrators of all time. While Beatrix Potter was also a famous conservationist and natural scientist, she is most famous for giving British children some wonderful books and characters to read. Beatrix Potter’s books usually featured animals such as Benjamin Bunny, Jeremy Fisher, Tom Kitten, and of course, Peter Rabbit. In December 2017, an asteroid discovered in 1992 was renamed 13975 Beatrix potter in her honour. Getting a piece of that asteroid as Beatrix Potter memorabilia might be almost impossible for all fans. However, the Royal Mint does have some other wonderful Beatrix Potter memorabilia in the form of Beatrix Potter 50p coins.

The Beatrix Potter 50p coins are among the most sought-after coins today. These coins are not just a celebration of Beatrix Potter’s incredible contribution to English literature, but they tend to also be extremely valuable.

Whether you are just starting to build your coin collection or looking to bolster an already existing one, these beautiful and rare coins are bound to delight you.

Here are all the Beatrix Potter 50p coins available today:

One of the most famous and beloved character of Beatrix Potter is Peter Rabbit. Earlier this year, the Royal Mint launched a brand-new commemorative coin featuring Peter Rabbit.

The Peter Rabbit 50p coin won’t be entering circulation but it is available for purchase on royalmint.com, with prices starting at £10.

2016 marked the 150th anniversary of Beatrix Potter’s birth. To commemorate that, the Royal Mint released a collection of special Beatrix Potter 50p coins.

These limited editions 50p coins showcased her iconic characters such as Peter Rabbit from The Tale of Peter Rabbit. Later releases also featured Flopsy Bunny, Mrs. Tittlemouse and the Tailor of Gloucester. One of the 50p Peter Rabbit coins recently sold for £1,000 on eBay.

You May Like: The New Sherlock Holmes 50p Coin: How Much is It Worth and How Can You Get It?

As far as rarity is concerned, the 50p coins released in 2016 are the hardest to find.

As discussed above, a 2016 Beatrix Potter 50p coin featuring Peter Rabbit was sold for £1,000 on eBay. The 2016 coins are extremely rare and feature a close-up of Peter Rabbit’s face. The silver version sold for £1,000. However, it’s also available on the Royal Mint website for just £10. The coloured portrait costs £55.

2017’s silver 50p coin featuring a running Peter Rabbit is also priced at £10. A coloured version, much rarer in nature, is worth £60.

2016 saw the release of two versions of these classic and beloved Beatrix Potter characters. Each of the 50p coins featured a portrait of the characters.

The silver versions of these Beatrix Potter 50p coins will set you back by £10. The coloured editions will cost between £55-60.

2017 saw the release of two versions of these 50p coins. Both versions carried a portrait of the characters. The plain silver ones cost £10, while the coloured ones will set you back by £60.

You May Like: Rare Pound Coins For Collectors to Watch Out For

2018 saw the release of two versions of 50p coins featuring portraits of these Beatrix Potter characters. The plain silver ones cost £10, while the coloured ones will lighten your wallet by £60.

This commemorative Beatrix Potter 50p coin was released in silver and gold in 2016. The silver version costs £55 while the gold version costs a whopping £780.

10 Best Things to Do in the Cotswolds