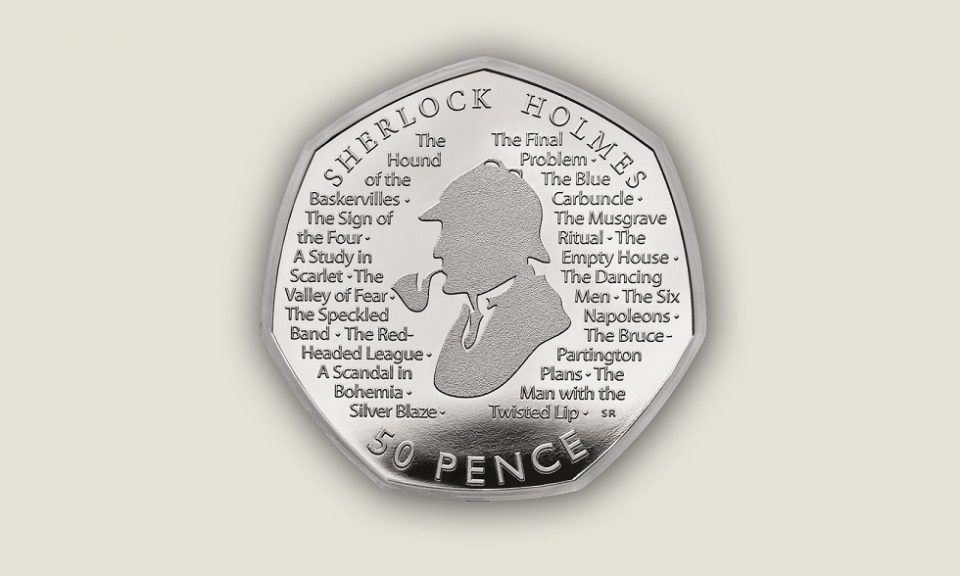 All British numismatists rejoice! The Royal Mint has introduced a new 50p coin to celebrate Britain’s favourite detective, Sherlock Holmes. The coin has entered general circulation and what that means is that it can pop up in your change at any given time and any given place. Remember one thing though, in case you stumble upon the coin in your change, the small piece of metal featuring the deerstalker-and-pipe enthusiast’s silhouette will be probably worth a lot more than its face value eventually. The total number of coins in circulation has not been revealed by the Royal Mint so it’s not possible to guess its scarcity. Let’s find out more about the Sherlock Holmes 50p coin and how likely you are to find out about it.

Sherlock Holmes 50p Coin: What We Know So Far

How much is the Sherlock Holmes 50p coin worth?

Earlier in May, multiple versions of the Sherlock Holmes coin became available for purchase on the Royal Mint website to celebrate the 160th anniversary of author Sir Arthur Conan Doyle’s birth. The coin has the famous detective’s silhouette surrounded by the names of some of his most famous stories.

You May Like: Rare Pound Coins For Collectors to Watch Out For

The cheapest version was that of an uncirculated coin in a presentation pack. You can still pick it up for £10. More premium versions, such as limited edition silver and gold proof coins, were sold for as much as £795 each before selling out altogether. These collector’s coins have since appeared on eBay, though they don’t always fetch a lot. One out-of-stock silver proof version of the Sherlock Holmes 50p coin was sold for £85, which is more than what the £55 charged by the Royal Mint. The same coin was also sold at a lower price of £40 on eBay.  The brilliant uncirculated version barely fetched a little more than its retail price at £11.50, just £1.50 above what the Royal Mint charged. This was an exception, as it most often sold for less. The circulated version of the coin, however, does have the potential to fetch big figures. But only if there aren’t too many of themHowever, that only happens if the number of coins in circulation is low.

The most valuable circulated 50p at the moment is the 2009 Kew Gardens coin, which goes for upwards of £100 on eBay. It’s worth so much because of its low mintage, only 210,000 entered circulation. In contrast, the 2016 Beatrix Potter Peter Rabbit coin was minted over 9 million times. As a result of the huge number in circulation, it was not rare enough to fetch a strong secondary market price since many people can just chance upon it in their change with ease. Since it’s impossible to estimate a coin’s value without its mintage figures, it’s going to be impossible to estimate how much the new Sherlock 50p Coin will be worth in the secondary market. Mintage figures won’t be available any time soon. If they end up being scarce, collectors might have to shell out Kew Gardens-level prices. According to coin collection site Change Checker, the Kew Gardens 50p was overlooked for years until official mintage figures were revealed in 2014. At the moment there is no way of knowing whether something similar will happen with the Sherlock Holmes coin. However, if you stumble across it in your change, it’s better for you if you keep it with yourself for some time. Change Checker says that with the £10 brilliant uncirculated version still available to purchase collectors would be unlikely to pay more for a circulation-quality Sherlock Holmes 50p coin.

You May Like: Beatrix Potter 50p Coins: Which Coins are Available and How Much Do They Cost?

Are there some other 50p coins to watch out for?

The Royal Mint has already released at least four new commemorative 50ps coins and coin sets this year – one of them even commemorated other commemorative 50ps. In March, the Mint released a Stephen Hawking 50p to celebrate the influential scientist, and a full-colour Peter Rabbit 50p – following the 2016 line of non-colour Beatrix Potter character coins. After Beatrix Potter and Peter Rabbit coins, the Royal Mint decided to celebrate more children’s literature with Julia Donaldson’s Gruffalo earning its own 50p in February. The Sherlock Holmes 50p coin differs a little from the other coins because it is the only one that has entered circulation thus far. So the only way you can find them is if a collector who bought them from the Royal Mint actually goes on to accidentally spend one for buying something. For the most part, you’ll have to buy them online to add them to your collection. There are, however, a number of rare 50ps which are in circulation that you could very well end up finding. The 2017 Sir Isaac Newton coin is the second rarest coin in circulation after the Kew Gardens coin. The circulated version appears to have sold for a range of prices between £1.04 and £3.99 on eBay recently. A lot of the coins which commemorate the 2012 London Olympics also usually sell at higher than face value. One of the funniest and most valuable coins on sale is the one that ‘explains’ football’s offside rule in a humorous way. There is another important fact that you need to remember, all eBay listings shouldn’t be taken very seriously. A lot of times, sellers inflate by setting a high starting bid. They can also secretly inflate the price by bidding on their own products. Always remember, a rare coin’s worth is eventually decided by what a collector is ready to pay for it. Just because you put your rare 50p coin for sale, doesn’t mean you can make money on it. Similarly, even if the Sherlock Holmes 50p coin ends up being rare, it doesn’t necessarily mean that it will be ridiculously expensive to pick up from the secondary market.

Everything You Need To Know About Giffgaff: FAQs Included!