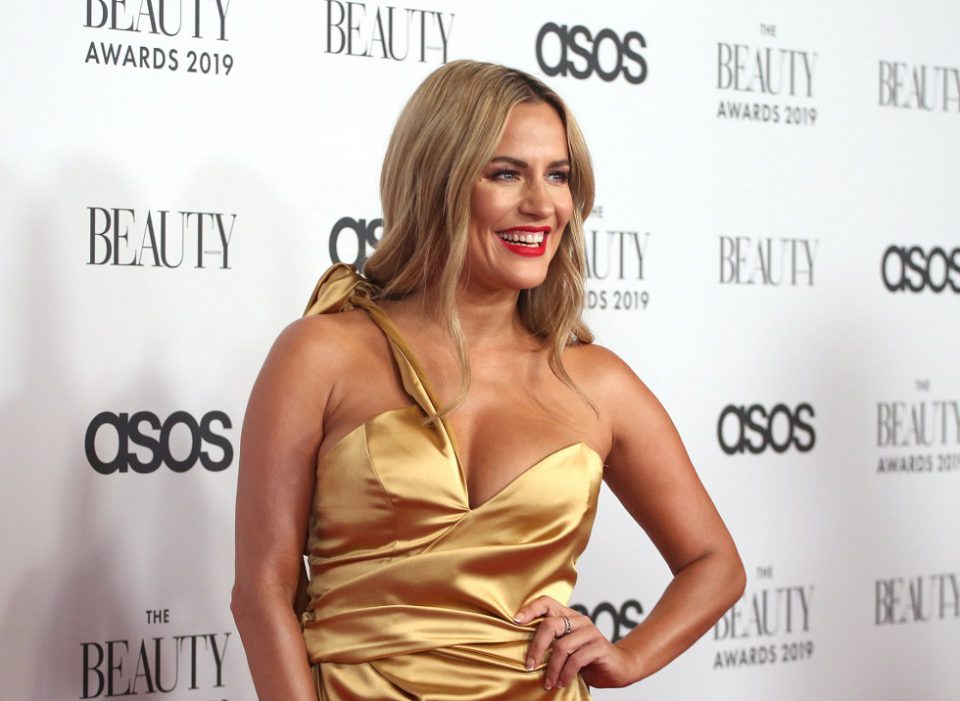 Caroline Flack was a radio and TV presenter. She began her career in 2002, where she got cast as ‘Bubbles’ on the sketch show Bo’ Selecta. The English host then moved on to be a co-presenter in shows like The Games: Live at Trackside, TMi and Escape from Scorpion Island. Flack also gained fame as the contestant and winner of the 2014 series, Strictly Come Dancing. She committed suicide in 2020.

Flack came into this world on November 9, 1979, in Enfield, England.

She has a twin sister named Jody Flack. As a young student, she attended Great Hockham Primary School and Wayland Community High School.

The TV presenter debuted on TV in 2002. She was also a cast member in a few shows and a contestant in a dancing show.

Her first break was on the TV show Bo’ Selecta, where she played ‘Bubbles’ in the years 2002-2004. Her career also bloomed when she went on to present the International Pepsi Chart Show and The Games: Live at Trackside alongside Justin Lee Collins. She later co-presented the morning show; TMi on BBC and Escape From Scorpion Island that aired on the CBBC channel.

Who is Caroline Flack fiance? Well, this question has been a juicy bit of gossip as the TV presenter has dated several guys, including Prince Harry, Harry Styles, and Andrew Brady.

She was also confirmed to be dating Lewis Burton with an Instagram post of her kissing him on the cheek. The couple started dating after an introduction by mutual friends.

Who is Caroline Flack engaged to?

The Love Island host dated the rugby player for a short period in 2019.

Caroline Flack and Andrew Brady started their relationship in February after meeting at a party in London. Their relationship moved at a passionate pace where barely a month later, they moved in together.

Caroline Flack’s engagement to former Celebrity Big Brother star Andrew Brady took place on April 28. They had only dated for six months before the engagement. How long was Caroline Flack Andrew Brady’s engagement? Unfortunately, their engagement broke off, and soon, they parted ways. Flack was quick to confirm the breakup and allegations of Andrew wanting to join the show Celebs Go Dating immediately after their breakup.

In 2017, the English TV presenter was getting fame for dating the late English footballer and TV personality Mike Thalassitis.

He appeared on the 3rd series of Love Island and the 4th series of Celebs Go Dating. Caroline denied the allegations saying that their relationship was very professional. Mike Thalassitis passed on and Ms Flack went on to pay tribute to his death saying he was a lovely gentleman.

Sam Smith’s manager, Jack Street, and Caroline Flack started dating in 2014. Within eight months of dating, they decided to shack up under one roof. During that year, they faced a sudden break up but the couple got back together in 2015. According to Mirror, they parted ways again after Caroline allegedly spotted an Instagram post of Jack with a reportedly new girlfriend.

Known to be one of the most scandalous relationships ever, (alongside Cheryl Cole), 31 year old Caroline briefly dated a former One Direction star.  Harry Styles stated that he had a crush on her, and their relationship was playful in the beginning.

Caroline Flack and Harry Styles then decided to keep it private as they were both working for Simon Cowell. Their relationship ended in 2012 after it went public and people started calling her a pervert.

Most viewers of The Xtra Factor kind of guessed that these two co-hosts had a romantic relationship outside the show. In an interview, the two stated that they liked each other in the beginning but were not romantically involved. Top facts about Ringo Starr’s wife Barbara Bach

Caroline Flack and Prince Harry were introduced by mutual friends and soon enough she was chatting and laughing’ with the Duke when they first met.

The English TV host and presenter told the media much later that she had to part ways with the Prince after the word about their relationship went out.

She stated in her book Storm in a C Cup that she decided to stop dating him after being called ‘Harry’s bit of rough.’

TV star Caroline Flack took her own life while she was facing trial accused of assaulting her boyfriend, according to the coroner. Coroner Mary Hassell ruled her death was suicide.

Ms. Hassell said Ms. Flack, 40, had killed herself after an “exacerbation and fluctuation” of ill health and distress.

The Court inquest heard sections of the media had been “hounding” the presenter over the alleged assault of Lewis Burton, which she denied.

The TV star’s mental health had deteriorated following her arrest, according to the coroner, Ms. Hassell.

Ms. Hassell stated that she was “satisfied [Ms. Flack] wanted to cause her own death” and “there’s no doubt in my mind at all”.

“For some, it seems she had a charmed life – but the more famous she got the more mentally distressed she became,” she said.

“Her trauma was played out in the national press and that was incredibly distressing for her.”

Who is Caroline Flack’s twin?

Caroline Flack’s twin sister Jody Flack is non-identical. Her sister remained one of her closest friends. The star said they were inseparable growing up, even sharing the same bed until they were four.

What nationality is Caroline Flack?

Caroline Flack was one of the best English TV presenters in the world.

The English television and radio presenter began her career as an actress, starring in Bo’ Selecta!. She then went on to host several shows like The X Factor UK, Big Brother’s Big Mouth, and The Xtra Factor. She was also named as the presenter of the Channel 4 series The Surjury.

Who are Caroline Flack’s parents?

After the suicide, The presenter’s mother Chris told the court she thought her daughter had been “seriously let down by the authorities and in particular the CPS for pursuing the case”.

She previously told the inquest that if Ms Flack had been a “normal person”, the police and CPS wouldn’t have “been bothered” to charge her.

Addressing Det Insp Lauren Bateman, Mrs Flack said: “No real evidence was put forward. If it was an ordinary person, you wouldn’t have been bothered.

“You should be disgusted with yourself. That girl killed herself because you put an appeal through.”

Det Insp Bateman said: “I was not biased and I treat everyone the same.”

Why did Caroline Flack die?

Ms Hassell (the Coroner) said: “I find the reason for her taking her life was she now knew she was being prosecuted for certainty, and she knew she would face the media, press, publicity – it would all come down upon her. To me, that’s it in essence.”

The inquest heard Caroline Flack assaulted her boyfriend (Lewis Burton) while he slept because she suspected he was cheating on her.

In the wake of this, she got arrested and Ms Flack had left her role presenting Love Island, the ITV2 dating show.

The day before her death Ms Flack had found out she would be prosecuted and feared press intrusion, the inquest at Poplar Coroner’s Court heard.

Mr Burton did not support the assault charge, and in a statement he said the last time he had seen Ms Flack “she was not in a good place”.

He said “the media were constantly bashing her character” and “writing hurtful stories”.

Deputy chief crown prosecutor Lisa Ramsarran said Ms Flack accepted she had caused Mr Burton’s injury, but “the explanation essentially amounted to it being an accident, which is a defence and was the disputed issue which was going to be the issue at trial”.

After the hearing, the Met Police said it “takes allegations of domestic abuse, by men or women, very seriously and investigates those allegations in accordance with national and Met Police policies”.