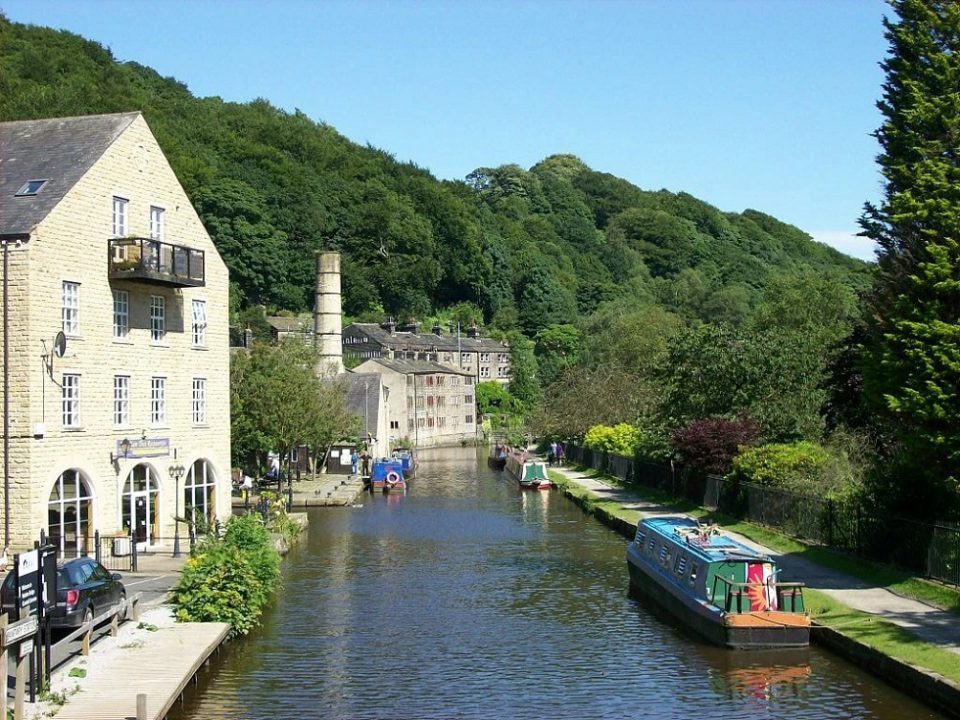 The Hebden Bridge has lots of interesting stories about the people that stepped foot here, including Sylvia Plath, Ted Hughes, the Brontë sisters. Check out these 10 things to do in villages, mills, trails and pubs nearby!

The Hebden Bridge hiding in the steep Calder Valley has always been a home to artists, musicians, New Age practitioners and green activists. In the 1970s and 80s this sandstone mill town invited people to the raw beauty of the Yorkshire Pennines as a proud progressive character, with a sizeable lesbian and New Age community and a live music scene.

Visitors also enjoyed the visuals of the handsome property, at old mills, warehouses, clothiers’ houses and the idiosyncratic double-decker homes lined up on the valley sides. Isolated and untouched by history, the land around Hebden Bridge hides many gems!

There is literary history too, as Ted Hughes was born in neighbouring Mytholmroyd and buried Sylvia Plath at the churchyard in the connecting village of Heptonstall.

First up on this list of things about Hebden Bridge is the Rochdale Canal which was completed in 1804 and threads through the Pennines for 32 miles between Manchester and Sowerby Bridge, not far east of Hebden Bridge. There’s a towpath all along the canal, and even if the walk is occasionally demanding, you’ll be paid back with lots of stirring industrial architecture, especially in the Calder Valley.

The allure surrounding the Hebden Bridge  is thanks to a waterway that cuts across the south end of the town,  responsible for a lot of the industrial heritage in the Calder Valley.

The constant changes in elevation through the Pennines is countered by more than 90 locks, which are little points of interest in their own right. A fine place to stop and unwind is the Stubbing Wharf Pub (see below).

In a fabulous location by a humpback bridge on the Rochdale Canal, the Stubbing Wharf Pub is a little way along the valley from the town centre. The pub’s beer garden is right on the towpath, and on a summer afternoon you could watch the canal’s traffic floating past over a drink or home-cooked meal.

It is thought that Ted Hughes and Sylvia Plath stopped at this pub in the late-50s, and it became the setting for Hughes’ poem “Stubbing Wharfe”, part of the Birthday Letters, a collection about his relationship with Plath.

A 400-acre National Trust site minutes out of Hebden Bridge, Hardcastle Crags has a deep, rugged gorge and a bubbling river, all under a mantle of mossy pine, beech and oak woodland. (Bluebells grow like wildfire here during the spring).

The National Trust has laid down walking trails through this magical landscape, with lots of photo opportunities, of the bracken-clad hillsides, the stepping stones over the river, the large boulders in the water and the preserved Gibson Mill, which we’ll talk about next. You can climb up the steep valley sides for satisfying vistas or stay by the water and take a family picnic next to an old weir.

In complete isolation a few hundred metres along the valley at Hardcastle Crags is the robust outline of the 200-year-old Gibson Mill. This cotton mill was water-powered and is reflected in a millpond.

The area surrounding the mill and the mill itself is owned by the National Trust and stages temporary exhibitions about Hebden Bridge. You can learn about the history of the mill and the renewable energy technology that has been installed here.

Gibson Mill is off the grid and is powered by photovoltaic cells, hydroelectric turbines and a biofuel boiler, while the interiors are decorated with local, upcycled materials and there’s a composting toilet. Check out the exhibition and stop at the cafe for a warming cup of tea or coffee during your walk.

At Hebden Bridge’s visitor centre you can buy a booklet for the Town Centre Trail, which leads you to eleven noteworthy places around the town – also available in mp3 which can be downloaded from the App Store as a podcast.

In short, you can discover the 16th-century packhorse bridge over Hebden Beck that gives the town its name and also discover the origins of the double-decker housing, which helped in maximising space on the steep valley-sides.

Also spot Hebden Bridge’s railway, going back to the 1890s and listed by historian Simon Jenkins as one of the best in the country, retaining its original signage.

Grab a bite to eat here at a cafe that transforms into a bar-club on weekend evenings.

Under the family of Hebden Bridge, this picture perfect village is perched high on the valley side around a hundred metres from the town.

Heptonstall’s little loop of alleys is impossibly quaint and the vistas of the Hebden Valley may stop you in your tracks. The village’s isolated location has permitted it to stay relatively untouched for 200 years, and there’s a pub, museum and tearoom to keep you around a little longer.

Many people make the trip to Heptonstall to visit the Church of St Thomas the Apostle, or more accurately, its churchyard extension where you’ll find the grave of Sylvia Plath, which is a pilgrimage site for fans of her poetry. Look for the 13th-century St Thomas a Beckett Church, which was abandoned after a storm in 1847.

There’s a great local museum in the center of the village at a former grammar school establishment dating from 1771. The school building was even older than that having been founded on this site in 1661, and finally closed in 1889. The museum paints a picture of village life in Heptonstall across hundreds of years, and dipping into key events, like the Civil War when there was a battle in the village in 1643.

One interesting story is the story of the Cragg Vale Coiners, a ruthless gang of 18th-century counterfeiters who made fake gold currency to boost their meagre income from weaving. There are also some interesting holdovers from the building’s school days, including an antique black oak desk.

Hebden Bridge Cruises invites people who want to experience a traditional narrowboat called Gracie, scheduling a choice of trips on the Rochdale Canal to soak up the Calder Valley scenery and the Yorkshire Pennine Hills at a leisurely pace. The Cream Tea Canal Cruise departs at 13:00 on Saturdays, and during this 50-minute trip you’ll be served tea and scones and can learn lots of new things about the Calder Valley and its wildlife. A longer dining cruise on Sundays is catered by the Stubbing Wharf Pub in Hebden Bridge and on the voyage you’ll get to see firsthand how a lock works.

Got hiking experience? Then pack some lunch in your bag and head on the eight-mile trail to Haworth. It’s going to be worth it as you see the Hardcastle Crags, the moody Wadsworth Moor and the three Walshaw Dean Reservoirs, which drain into the Calder River.

In terms of historical significance, Haworth was well associated with the story of the Brontë sisters, and you can check out the parsonage where they spent most of their lives and wrote their most famous novels. This has been safeguarded as a museum, while on the trail from Hebden Bridge you’ll come across sights connected to the sisters.

For example, Top Withins is a ruined farmhouse which may have been an inspiration for Emily’s Wuthering Heights, while the Brontë Waterfall and bridge is a beauty spot often visited by Emily, Charlotte and Anne.

Ending our list of things to do around Hebden Bridge is along a wooded valley beside a fast-flowing stream that tumbles into the Calder Valley. In the early 1800s Jumble Hole was an industrial area with four hulking mills which fell into ruin even before the Second World War. You can still spot their decaying remains on the trail!

If you’re there during winter then visit the Staups Mill which is a little more than two walls next to a waterfall. During the spring, the area is bedded with bluebells, while there are lots of cooling tree cover in summer and occasional views over to Stoodley Pike.

Last but not least, during any month, you can combine this walk with another memorable natural sight, Great Rock which is only a mile away

10 Cool and Unusual Things to do in Greece

10 Things To Do Around Hebden Bridge For Everyone